I've managed to catch another cold, so I'm going to share this with you guys real quick and go back to bed. It's something that had been bouncing around in my head for a while and I finally got around to making it several weeks back. Why didn't I post it then? Well, I was hoping to find a way to make it more... visually appealing. 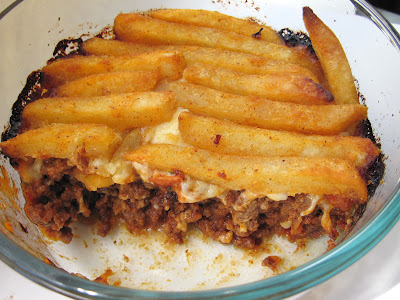 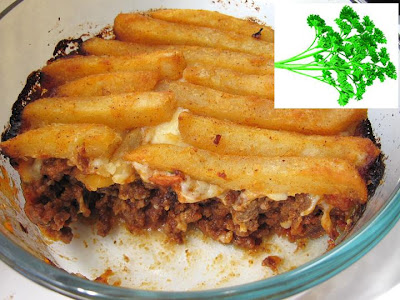 I'm afraid I also don't have lots of pics for it, but it's so simple I don't think they're needed. All I did was make some sloppy Joe stuff and then fill a casserole dish with it, top it with a small mountain of pepper jack cheese (the perfect cheese for sloppy joes, just so you know) and then top that with a bunch of frozen seasoned french fries. I believe they were Zesties. I pre cooked the fries a bit to defrost and get them started crisping. But that was it, other than baking the whole thing at 375 for fifteen minutes or so, until crispy and bubbly. The Joe was still pretty hot, since I had made it right then, so it didn't need that much time. I was pretty much just melting the cheese and finishing up the fries.

I think next time I'm going to do the Joe a bit different, with lots more veggies that are cut into bigger chunks. Since it's a casserole and all. Maybe even an additional layer of cheese and potato in the middle. Maybe cut the fries into small cubes to get a more jagged topping for more crunchy brown bits. But even as it was, this was awesome. 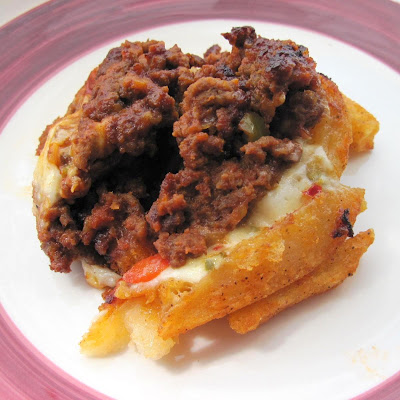 It got a great crust around the edges, the creamy/spicy pepper jack goes great with the sweet/slightly spicy filling and the seasoned fries were the cherry on top of the cake. If you don't mind a mangled metaphor. Well, the cold medicine is clearly kicking in so back to bed for me. But give me something to read while I'm incapacitated. What's your favorite casserole?


Email ThisBlogThis!Share to TwitterShare to FacebookShare to Pinterest
Posted by Bob Labels: beef, cheese, comfort food, potato at 9/21/2009 11:42:00 AM

If a guy with grey hair and his 12-year-old daughter show up on your doorstep...they're my husband and daughter. He LOVES fries more than life (and probably me) and she LOVES sloppy joes ever since she had them at...yes...camp. Feel better!

Sorry you're sick! Do you need me to make you some soup?

I'd go with your suggestion of cutting up the fries so you get lots of crispy bits! Sounds delish! Bless you! (I thought I heard you sneeze)

another cold? we need to quarantine you for a while.
but at least you still know how to make delish comfort food. all the best stuff is in here.
maybe putting cooked/crisp fries on the casserole when the casserole is done cooking?

Looks like this is fun for the cold weather...not the cold sickness. That's no fun.

Aw, geez, sorry you're sick again. The kittehs will take care of you, no doubt.
I've made a similar casserole with Pillsbury croissant dough on the bottom of a pan and topped with tater tots. Carb City! Tasty, though.
Feel better!!!

Sorry bout the cold, dude. It looks delicious. And I really think the parsley set it off nicely... ;)

Take it easy. Get lots of rest and drink plenty of fluids. I think you should be eat more chicken soup that sloppy joes, then again if I were sick id be eating sloppy joes instead of soup. This one looks good. Love the addition of the fries on top.

unconfidentialcook: Heh, unfortunately this stuff is long gone. But I could always whip up a fresh batch for them, my girlfriend won't touch it.

Kaje: Heh, thanks, but I'm going to have mac n' cheese later. Like soup, but with more cheese.

Karen: Thanks, it wouldn't surprise me if you had heard me. ;) Yeah, I think that's what I'm going to do with the fries next time. I'm all about more crunchy bits.

Dawn: If you can get me a doctors note for a quarantine, I'll stay home as long as it takes! Heh.

Duo: Thanks! It's definitely a cold weather dish.

Goldie: Actually my cats have been ignoring me all day, the little bastards. Except when I made lunch and they came to see if it was tuna. It wasn't, so they went back to sleep.

That casserole sounds awesome, I bet the crescent rolls on the bottom were wicked good.

Jenn: Thanks! I wish I had sloppy joes to eat, but it's been ramen today so far. Heh, I should keep a chunk of this stuff in the freezer for the next time I'm sick, it's spicy enough to clear the sinuses.

Delicious looking casserole! I love throwing ingredients together and coming up with something tasty. Feel better soon!!

this is what I call comfort food!

I took some ground beef out of the freezer a few hours ago for dinner...was gonna make plain old burgers, but maybe I'll do something inspired by this...

a casserole...with the pepper jack cheese too, since I have that on hand...

won't have the fries...mmm...thinking out loud here.

If it materializes I'll put it on the blog!

Never really had this dish, but sounds so good.

I hope you feel better soon! That dish looks really like some awesome comfort food! My favorite casserole is probably eggplant parm. But Shepard's pie is a close runner up!

Don't worry Bob, I'll finish with the camping recipes on my site soon!

I love this!! Serious comfort food for sure! And so creative. Hope you feel better soon!!

Love the idea of topping the joes with fries - I might even be able to get my son to like sloppy joes that way. :)

Hope you're feeling better soon, Bob! The casserole is an excellent idea! I love the fries on top.

Hope you're getting better already.
That casserole looks very comforting.
My favourite casserole was the one my mom used to make. Pretty much how you prepared Sloppy Joe, then thinnly sliced potatoes.
Make layers (like lasagna) with potatoes, then meat and so on. Pour in a little water and into the oven. When it's done, mix a couple eggs with milk and pour over. Let the eggs set and that's it.

I could go a slice of that right now! Hope you feel better soon :)

Feel better soon! And I thin you should run for President for creating this dish!!! YUM..Total comfort food at ot s best

Ok the garnish is just too cute! This sounds like a seriously delicious dish. I've actually never put cheese on sloppy joes, but I think it's a great idea! And pepper jack makes everything better IMO. Combine those with seasoned fries - wow! My favorite casseroles are usually Mexican, but this one might just win out... :)

YUM!!! what more is there to say? LOL

Feel better! My fave is shepherds pie, of course, but this sounds gorgeous!

Nice! This sounds so yum! The kiddos would go wild for it...I'll have to try it. I hope you're feeling tip-top soon. I love tortilla casserole...one that my mom used to make when I was little and then lost the recipe. Grrrr.

Feel better and I would scarf this down in a second!

No one mentioned it so I have to...Tater Tot Casserole - mmm! It's absolutely my favorite!