So. I've been on a bit of a hiatus, although it wasn't really by choice. Frankly, I've been wicked busy and haven't cooked much that's new. But I did make these barbecue chicken biscuit cup things. 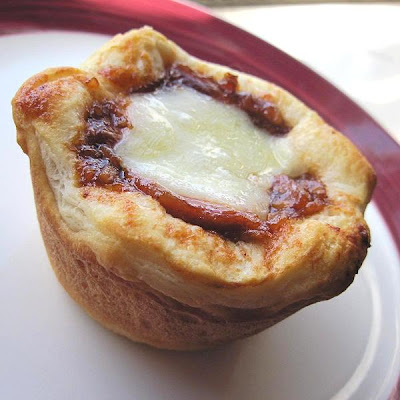 They're from a Pillsbury cookbook that I won from Kitchen Girl Jo (thanks Jo!) some time ago and are the second best thing you can make with canned biscuits. The best is, of course, monkey bread, but these little cup dealies are definitely next in line. The original recipe calls for ground beef, but I had some cooked chicken in the freezer that wanted using, so that's what I used. You could fill them with whatever you want though, meat or veggie, sweet or savory. I was thinking of doing a breakfast version, but I'm still working on it. I'm going to do another post with actual instructions after I make them next and get a full set of pictures.

That's another reason I haven't been posting, I haven't gotten a decent picture in a while and that makes me angry. I was supposed to take part in a Coast to Coast cooking event with my Bakespace buds, but the pictures came out so bad I'd be embarrassed to put them on the 'nets. I've started using GIMP for photo fixing and even that couldn't help them. But, I have a couple things lined up, my busy level has dropped dramatically and I should be back to posting relatively normally. Thanks to everyone who expressed concern over my absence, I assure you I'm fine. Heh.

Man, that picture alone gives me so many ideas that my diet will not appreciate...

Good to hear from you again, Bob. You need to make your way over here while we are still here, and before I lose my beautiful stove.

These look great, Bob--I can't wait to see what else you do with these.

That's a really neat idea. Like a chicken sandwich in a cup. Portable, handy and looks delicious. I love it. I've got to give this a try. This would be really hand at parties and such.

I love bbq anything, in a cup, in a sammie, in a biscuit...oh yeah. And these are portable! LOL Love it.

Jenn: They would be perfect for appetizers/finger food, I never even thought of that. Shows you how much entertaining I do.

Yes, it's like you disappeared! But these look like little yummy bites to make a come back with!

Life happens, doesn't it? Glad you're back and with something tasty! Can't wait to see the full set of pictures.

how cool! I can't wait to see the breakfast version :)

Bob, glad you are back! I thought maybe you had gone on vacation...

I hear you on the photo frustration, I recently posted about that on my blog. Lighting appears to be part of the solution--I'm going to get one of those Lowell lights from Amazon. Argh.

Beautiful food! :) Glad to see you back.

noble pig: Heh, I did kind of disappear. But I'm not one to come back empty handed! :)

Palidor: It does, sigh. Stupid world, getting in the way of my blogging. Heh.

Goldie: Ooo, that sounds good! Thanks. ;)

Danielle: Me either. Heh.

Hungry Dog: Heh, I don't get vacations unfortunately. I was looking at those lights myself, but I can't swing several hundred dollars right now. They look really nice though.

Vicki: And thanks to you as well. Heh.

These biscuit cups look so wicked ... love the melted cheese (I think that's what it is?) in the middle. Don't be too hard on yourself. Sometimes a lack of good lighting makes a good photo so difficult if not impossible.

What a fabulous idea. Looks so delicious!

I am glad that things are settling down for ya. These look REALLY delicious!!! Bummer that GIMP wasn't working for you. I use it on my MAC to compensate for the evil florescent lighting in my kitchen.. ;) One of these days I will have extra funds to invest in a light box.

I love the idea of bbq chicken inside the biscuits! Great picture!

The picture is gorgeous! I feel that I can grab it if I get closer to my PC screen. And the idea is just perfect for friend gatherings.

Most awesome Bob...and we DO miss ya when you're gone. Hope you make it to the next bs challenge! wooohooo!

Well, these are fun and easy! Bet the kiddos would like them, too. I've never heard of GIMP.

Mmmmmm bbq! We have a friend obsessed with putting the sauce on anything. He'd die for these.