(all measurements are approximate) 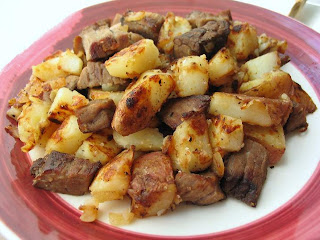 Preheat about a 1 1/2 tbls of oil in a nonstick skillet to medium heat. Cut the potato into 1/2 to 1 inch cubes. Add them to the pan and stir them gently to coat. Let them sit for a minute or two. Add the onion and stir gently to combine. Let them sit for another couple minutes. Add the roast beef and stir gently. Add salt and pepper to taste. Let them sit, flipping with a spatula every few minutes and pressing them slightly to maximize contact with the heat. Do this until they develop a brown crispy crust on most sides. Serve immediately.

Hash is a great way to use leftovers. If you have a couple of boiled or baked potatoes from the night before and a chunk of some kind of meat you are good to go. Some people like their hash smooth, I like it chunky. I used some leftover roast beef from a piece of beef I roasted a while ago, I'll be posting about that next week. But first, the hash. 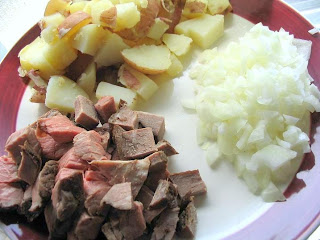 If you wanted to go nuts you could add whatever you wanted, hash is a concept not an absolute. The potatoes were just boiled and then cut into half inch cubes, the onion is just diced sweet onion, and the roast beef is cubed like the potatoes. You could cut the pieces as small as you want or even run it through a meat grinder or food processor. I've seen recipes that do that but like I said, I like it chunky. Now while I was prepping that stuff I had my skillet on low with a chunk of fat that I had trimmed off the roast rendering in it. 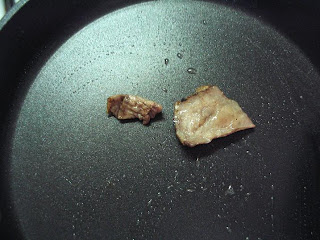 Because, well, beef fat is good. I didn't get quite enough before I was ready to start so I wound up tossing in a little bacon grease too. The key to getting hash brown is enough fat. You don't need tons, but you should be able to ever so lightly coat pretty much everything. Now first I turned the heat up to medium, removed the chunk of fat, let it get hot, and added my potatoes to give them a head start on the browning and make sure they were coated in fat. 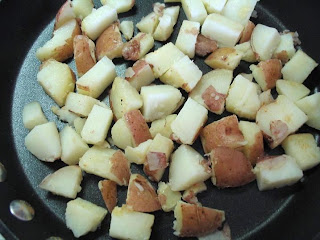 Well browned potatoes are the best. After they had sat for a couple minutes I added the onion 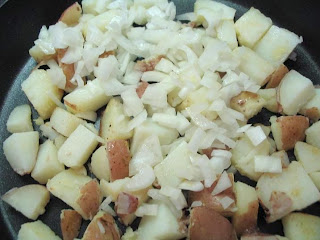 and stirred it gently in. 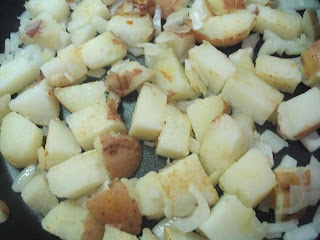 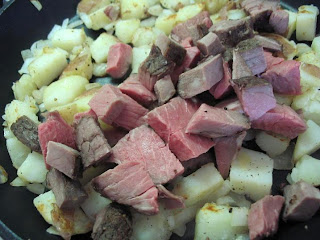 and then stirred it in. 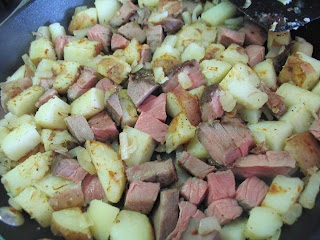 At this point I also started squishing it down a bit with the spatula. 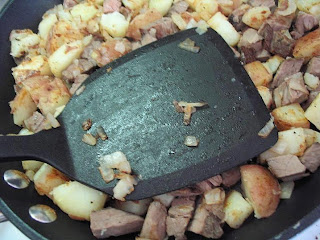 You don't want to mash the potatoes, but you do want to get as much stuff touching the hot skillet as possible. This is the other key to good browning. And browning = flavor, as you all know. Some of the potatoes will break a bit and have little pieces come off. 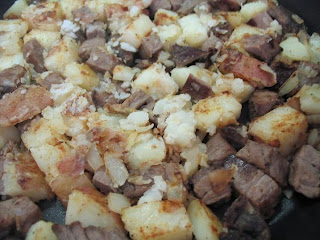 That's fine, they will turn into little browned chunks of flavorful loveliness. So, you should flip the hash every once in a while, pressing down gently between each one. Add some salt and pepper at this point, if you like. Or you can wait till it's done and add it to taste then. If it's not browning enough leave it alone longer. If it's starting to burn, turn down the heat and maybe even pull the pan to an unused burner for a minute. Just let it sit, flip and squish. Here it's just getting going. 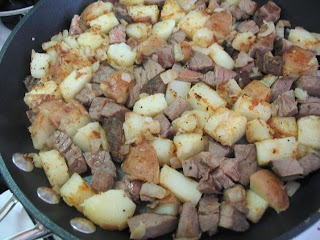 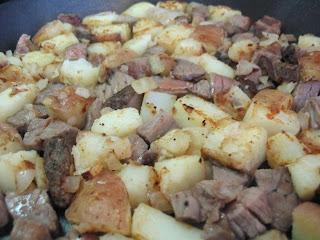 And just about finished. 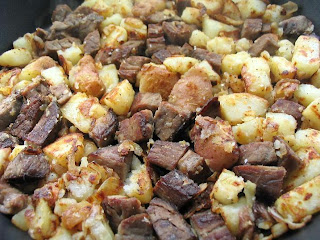 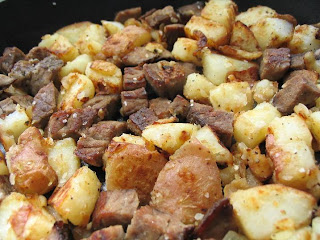 So that's it, roast beef hash. 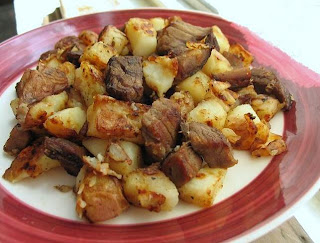 All kinds of things would be good in this, like peppers, a bit of cream, top it with cheese at the end, other veggies like broccoli or carrots. A bit of garlic would have been nice too. I will be making it again and changing it up, but it was wicked good just as simple and straightforward as this. I'm entering them in Mays Potato Ho Down too. 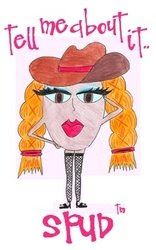 That's really why I'm posting them before the roast beef itself, to make sure I get it in on time. Heh.
Email ThisBlogThis!Share to TwitterShare to FacebookShare to Pinterest
Posted by Bob Labels: beef, breakfast, comfort food, potato at 5/15/2009 12:00:00 AM

Crap, I am starving and now I am drooling. I want a big ol' plate of this RIGHT NOW! It looks soooo good...I love that you used big chunks of everything. Hungry.

That hash looks delicious! Would love some of it for breakfast right now!

Bob, thanks a lot. I'm having boring peanut butter and toast with coffee for breakfast. And I see this. I am now starving...

I'm so glad you posted this. I made what I thought was hash and it was weird and wet and looked nothing like yours. That's because I never had hash before. Looks good. Your potatoes look perfect!

5 Star Foodie: Thanks! I wish I had some right now myself...

Dawn: Hey, there's nothing wrong with peanut butter and toast. I mean, sure it's not hash... :D

Michele: You've never had hash? It's the best! There are tons of different ways to make it but this one is the easiest, I think. How did you make yours?

Delicious meal, I can have this for supper too!

Gosh, between this meal and those lemon cupcakes .. still thinking of that glaze.. I am coming for a visit.

I love me some Potato Ho Hash! Yahoo!

How delicious! Love those crispy taters. I'm a potato ho.

I agree with Donna - would love to come eat at your place! This is simple fare yet so delicious.

Any potato done any way is good. Pass the ketchup please.

I love all your step by step tutorials!

oh man does that look good!! I love fried potatoes. and its a great way to use left over roast!!! way to go Dude!!

Chunky or smooth, I like hash! Look how beautifully browned the taters are. I want some!

Hmmmm, I just ate and now I look here and got hungry again! Yum!!

Mom's hash bore no resemblance to yours :). This really looks good.

What a great simple dish! Sometimes the simplest things are the best!

Now this is comfort food that makes you smile.