I saw this over at Pioneer Woman and had to make it. Promptly. So I did. You've already seen this shot. 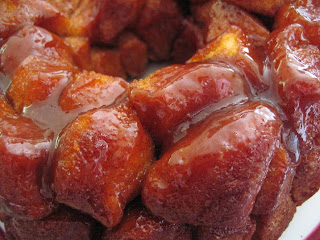 It's monkey bread. And it is just as glorious as Ryan said would be. It's like the biggest, stickiest sticky bun you've ever had. And it's so easy you could cry. The tears will probably be for you figure though, you will loose it if you eat much of this stuff. Because it's got so much butter in it. Which is why it's so damn good. This version of monkey bread is made with biscuits from a tube, which I happened to have on hand when PWs original post went up.

But here's the thing. In case you haven't noticed, I'm not posting the recipe. That's because I pretty much did it exactly like Ryan did over at PWC. I changed the amounts since I was making a smaller version, but other than that I didn't do anything to make it my own. Plus, I apparently forgot to take pictures of most of the prep work. Seriously, here's the keepers from the stuff I actually took. Melting butter and sugar. 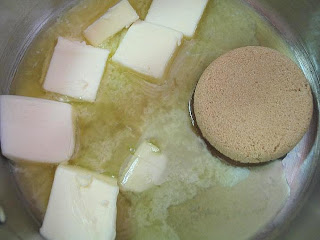 Good start. That's a whole stick of butter there. Pouring the butter and sugar over the pieces of biscuit. 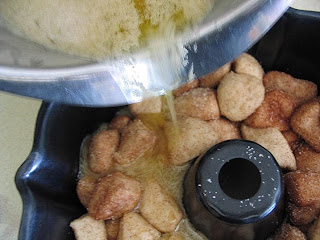 And the biscuit bits swimming in the stuff. 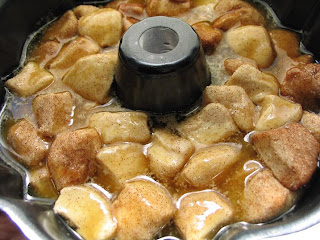 That's it for the prep. Kind of sad. But I will make up for it by posting 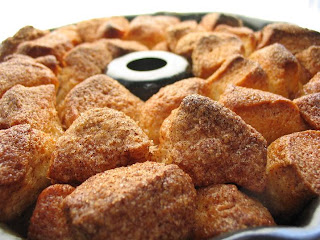 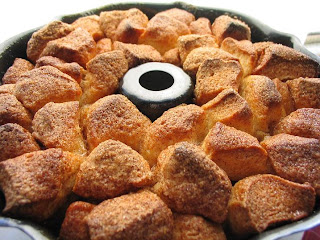 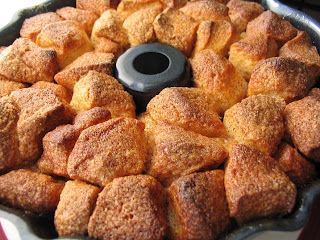 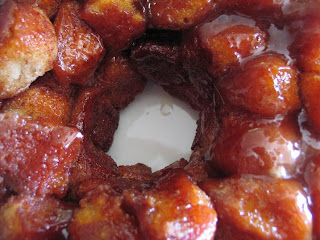 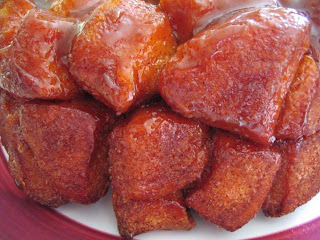 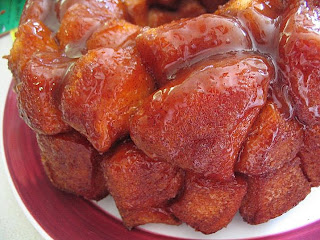 I got tons of these. 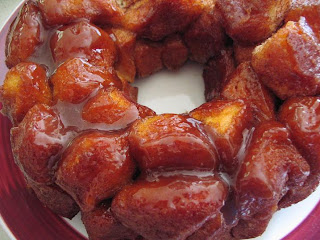 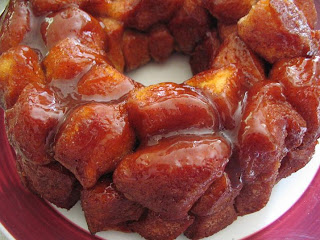 This stuff is pretty photogenic. All that glossy caramel and sweet, sweet cinnamony bread stuff. But what I'm going to do next is make some changes and do a new post with recipes and actual instructions. You know, like I do. I just had to share this because it was so good. How good is it really? Well, see this crater in the side? 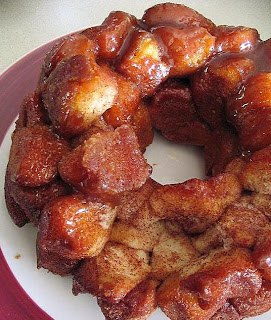 I made it with my face.

You did not stick your face in there, did you??? LMAO! I hope you at least gave in a chance to cool off!

Steve and I are babysitting for his two neices on Friday. I was going to make choc chip cookies but this is so much easier! Was it still soft the next day?

I wanna see a pic of your face after you smashed it into the monkey bread. LOL

Oh my goodness! I have to make this but I won't stick my face in it. Your post made me laugh!

ha ha ha ha ha ha...love it! This seriously looks too good! I just happen to have refrigerator biscuits in the fridge...hmmm, off to check out the recipe :)

Ooh I've made this before. But, I must say, yours looks way better then mine did.

Michele: Heh, no I didn't really stick my face in it. I wanted to though. This is easier than cookie, but it doesn't keep at all. It's best eaten asap.

girlichef: Do it. It's the bomb.

Pocky: I bet yours tasted just as good though. :)

Wandering Coyote: Thanks! Maple syrup, huh? I bet that would be good.

Haha! I would do the same! I've been wanting to make this for years. I don't know what I'm waiting for. It looks beyond delicious!!

Oh, how neat, a monkey bread - I absolutely have to make one like that! Yum!

You are funny!! :) I saw this over at PW site also. Looks good there and looks great here. I was thinking on making her strawberry shortcake cake actually too.. Her french breakfast puffs are delicious, Ive made them many times.

I make monkey bread for my husband's family's Christmas breakfast every year. I make two and don't get any it goes that fast. This year, I'm buying a new bundt pan and making three.

I bookmarked this recipe too! Yours looks amazing and I am dying to try it.

It looks beautiful! That would be a great bread to serve to company!

Reeni: It's the bomb, I can't recommend it enough.

Donna: Yeah, pretty much everything she makes looks devastating. I've made several of her recipes and they always come out good.

Dawn: Heh, it was wicked good.

Jamie: That's just not right. You should totally make three.

pigpig: Can't wait to see what you do with it!

JennDZ: Totally. It's one of those things that people will think is much harder than it really is. Heh.

You see me? yeah I am a huge monkey bread fan! It's a southern thing!

This looks and sound much AWESOMER (is that a word?) than the recipe I have... Mine contains orange juice, which sometimes makes the whole thing a big soggy mess.. I MUST try this... Sounds excellent for feeding hungry coworkers!!

I just died and went to heaven!

monkey bread must be in the air!! and now that I've seen or heard it mentioned at least 3 times in the past couple of days....guess what my plans are sometime this weekend!! YUMMY!! Love the stuff.

Im in australia and not sure if we have cans of biscuits? Does anyone now what can be substituted?
thanks ;-)

I got the recipe from PW and made it just like it said - FANTASTIC!! Just like everyone else, I was picking at it before it even came out of the pan! I would actually recommend NOT using the Grands biscuits and going for the smaller ones. The Grands biscuits leave the chunks too big, and they dont allow as much of the cinnamony mixture to get into all the little cracks and crevices! I pulled it out of the oven last night around 6pm and it is now gone at 8pm the day after! People couldn't leave it alone!

Where can I find the recipe for this?!

Maddy: The name "Pioneer Woman" at the beginning of the post is a link to the recipe. Enjoy!

The first monkey bread I ever made was with frozen dinner rolls. I've also used frozen loaves that I snipped into rolls with scissors. The concept is the same, but we always put it together the night before we wanted to bake it. I usually just stuck mine in the cold oven. Next morning, it's puffy and perfect. Bake and there ya go. We often added nuts with the butter and brown sugar mixture AND a package of regular vanilla or butterscotch pudding. Gooey, sticky, sweet, nutty, yeasty wonderfulness!!