Broiled Strip Steak with Compound Butter and a Chardonnay Review 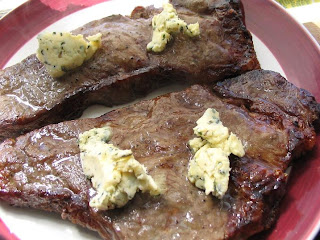 Yeah. These were really good. I made the compound butter with some of those frozen herbs and some Dijon mustard. Then I plopped some on the steaks while they rested, tented with foil. 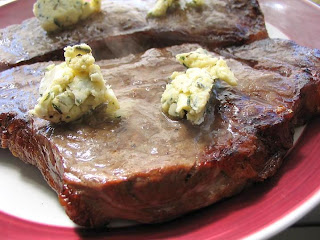 I also sauteed up some broccoli and peppers in a little olive oil and herbs. 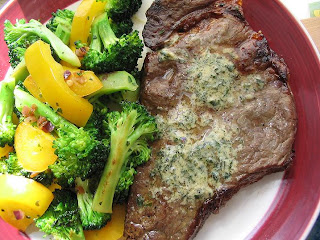 Good times folks. And since it contains almost all the major food groups it's good for you. I promise.

Now the wine. April's wine of the month over at Bakespace was chardonnay (I got to pick it! Excitement!). This is one I grabbed when I couldn't find what I had wanted. And then the last time I was at the packy I found the one I had been looking for originally. Of course. So I'll review that at a later date, it was wicked good. But here's the one I did drink. 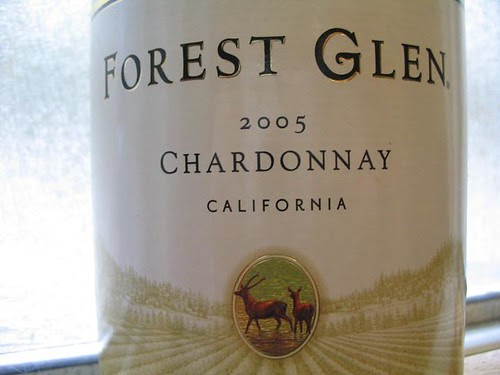 Short intro from the wine maker about the wine: Nothing on the bottle.
Review:I couldn't get a good smell since my entire apartment smelled strongly of garlic from the pasta I made with it. A bit dry, tart, medium oakiness and not just fruity but grapey. A slightly sour note at the very end, but that might be the bottle. The flavors stick around, but the mouth feel doesn't.
Would you buy again?: Probably not, it was good but there are other chards I like much more.
Wine Pairing Ideas/Recipes: It went well with pasta in a white wine/cream/chicken broth sauce, broccoli, Italian sausage, spinach and peppers. Of course, I made the sauce with the wine, so that probably helped. I don't have that recipe up, but this one is similar and I bet would be good with it too. Stuff with a white sauce, chicken pot pie, mellow cheese like mozzarella? Yes. White pizza? Totally.
Email ThisBlogThis!Share to TwitterShare to FacebookShare to Pinterest
Posted by Bob Labels: beef, booze, broccoli, review at 5/02/2009 12:00:00 AM

I personally prefer red wines, so I can't say much about your chard.
The meat and vegies look absolutely great. I enjoy food that not only tastes good but has a perfect colourful presentation as well. People remember: five different colours on your menu every day

I wish I could get my hubby to eat more veggies. I mean your steak looks heavenly, but so do your veggies. You're a guy and you're eating your veggies. LOL

Compound butter on steak is the way to go...the veggies look aweaome too. Nice colorful meal.

Yum! I love a good steak, and your veggies look great, too.

Great way to use the frozen herbs. I'll have to give it a try. We don't eat beef that often, but that steak suuurrre looks good!

These steaks looks awesome. Broccoli and peppers look good too.

Now that's how steak should be served - with some lovely, herb-y butter just melting languidly on top! Thanks for the wine review - it's great to find out about different bottles.

Love the melted butter on the steak ... how indulgent.

hey bob! It's been a while! I have my hands full these days. your blog looks great!!!! I bet you'll have your own food channel one of these days! my gramma is a follower now! keep it up!

Hi Gina! It has been a while, but new babies keep people busy. :)

Heh, go Gramma. I don't think any of my grandparents ever learned how to use a computer.

Whoops, I thought I had responded to all of you guys already! Sorry!

Dawn: Yep! You aren't the only one who is surprised, you should have heard my mom. Heh.

noble pig: Thanks! I recently discovered compound butter and I love it. It's a dangerous thing.

Elra: Thanks! Good for weeknights too since it's so quick. Hell, it would be good for breakfast.

Karen: Thanks! The frozen herbs worked great in it, lots of flavor.

My comfort food network: Thanks. :)

noobcook: Very, I don't do it much. But every once in a while it's a good time.