Ok, first off: I've never been a jarred sauce fan. I sometimes use the little cans of tomato sauce in recipes, but I don't think that really counts since it doesn't really have seasoning to speak of. And I don't think they are really meant to be used as is on stuff... at least I hope not. I usually find the stuff that you're supposed to use as is either too bland, too sweet or a combination of the two (or some other horrid infraction). Plus I really enjoy making tomato sauce, so why would I buy it? Well, for convenience I suppose. But I never did. Then Napa Valley Bistro wants to send me some free samples. 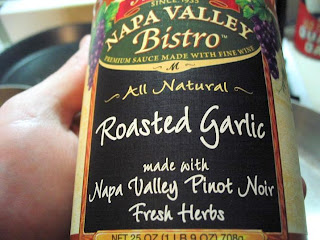 It's been years since I've had a jarred sauce, so I figure what the hell. Plus if all their claims are true, it's probably at least palatable. So how was it? It was surprisingly good. It's not how I would season it, but if I wanted sauce seasoned how I do it why would I bother to buy it? It had a very strong flavor, you could really taste the garlic, tomatoes and wine, but it wasn't boozy. It claims to be made with fresh herbs and I totally believe it. It didn't taste anything like the jarred sauces I have had before. Here's what I did with it.

My girlfriend wanted a meat sauce, so I browned up some hamburger and just dumped the jar of sauce into the pan to heat up. I made some ziti and portioned her out some. I didn't really want just a bowl full of pasta. I wanted baked ziti. This isn't the way I normally make baked ziti (which I've made some changes too, I need to update that post), but it's a fine method. I just mixed up some sauce and pasta, covered it with mozzarella, sprinkled on some parm and baked it at 450 till it was nice and brown. 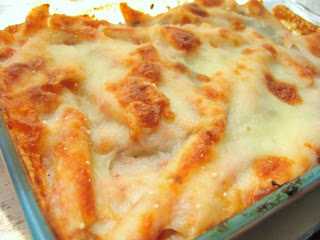 Since the sauce had such a strong flavor I wanted to see how it hold up to all that cheese. It held up just fine. 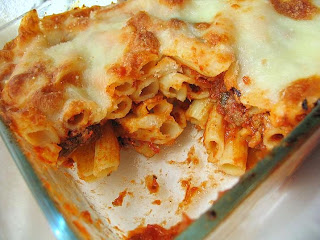 It was even better the second day. 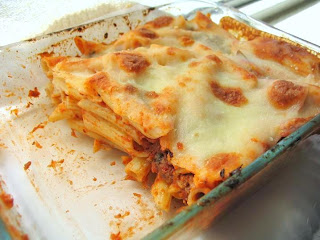 But would I actually pay money for it? Yeah, I think I would. I could see having a jar of this in the pantry for nights when I don't have the time or inclination to make sauce myself.
Email ThisBlogThis!Share to TwitterShare to FacebookShare to Pinterest
Posted by Bob Labels: cheese, italian-esque, pasta, review at 5/23/2009 12:00:00 AM

The baked ziti looks great! I was raised on jarred sauce so I still use it-mainly because I don't like chunky sauce and most home made ones are chunky. I did just buy an immersion blender, so home made sauce is on my list to try with it.

I think this sauce looks and sounds like it would be mighty tasty as far as jarred sauces go (which I do keep on hand for a quick meal). Your baked ziti looks awesome!

You're so right about those little cans. They are not meant to use the way you would use a jarred sauce. My family always used it to add to soups and stews and whatever just to give a little color and tomato flavor when it's needed.

MMMM, Ziti!! I use jarred sauce sometimes for pizzas - usually Barilla - but I always doctor it up. I like making sauce too, it's fun, and a stress reliever, and it smells up your house real nice.

I always keep a jar of sauce just for those times when I need quick! The Napa sauce sounds really good, wish I could find it around here.

I generally like to make my own sauce, too, but sometimes I just love the convenience of a jarred sauce. This one looks excellent, as does your ziti.

Good to know...it's not easy to find a good sauce in a jar, and you're right...it's always helpful to have on hand for lazy nights.

I've never seen that sauce before, but it sounds really good!

Thank you for sharing this recipe. :)

I also enjoyed reading some of your posts and I learned a lot of things. Please keep on sharing. :)

Your ziti looks wonderful, I dont think they sell that sauce here in NJ, havent seen it anyway. Ill have to look for it. Nothing wrong with shortcuts for those crazy busy weeknights.

Bob,
I love the crusty cheese on top of your ziti. I have a simple meatless ziti on my blog as well.

Also, there's an award for you at my blog! Come by and pick it up when you get a chance.

Wow.. this sounds so yumm! recently I got a craving for Pasta anything.. I'm off to get the ingredients to make this recipe.. See ya later :P