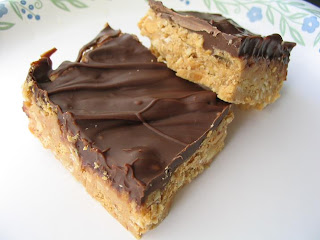 Spray an 8x8 pan with cooking spray. Line with a strip of parchment paper that hangs a couple inches over two sides, forming a sling kind of... thing. Crush the cookies fairly fine and mix them together with the sugar and oats. Melt the butter over low heat in a small sauce pan, once it's melted add the peanut butter. Stir till melted and combined. Add to the sugar/oat mixture and mix to combine. Spread in an even layer in the pan. Refrigerate, covered, for 20 minutes. Melt the chocolate, pour it over the chilled peanut butter mixture and spread it evenly over the top. Return to the fridge and chill, covered, for at least a half hour. To cut it run a large chef's knife under hot water for a minute, dry it off and then cut the bars into squares, wiping the knife clean after each slice.

First, a warning. Kids, these babies are rich. Like the Monopoly guy dipped in cheesecake rich. At first I was worried that I would eat the whole pan in an evening, but that isn't even a concern. And I'm known for my ability to eat way more sweets than is necessary. So, invite some friends over to share them with, have a glass of milk handy, but do make these. They are wicked good.

The other day it was 90 degrees here. In April. Way too hot to bake without a/c. But, I wanted to make something sweet. It's not a big shock that I picked peanuts and chocolate for the flavors, I think my proclivity for that combination is well known. So I scoured the 'nets, squished a bunch of no bake bar recipes together and came up with this. It takes a little bit of stove time, but it's nothing like having the oven on 350 for a half hour. Here's what I did.

First, cookies. I used Nutter Butters. Because they are awesome. 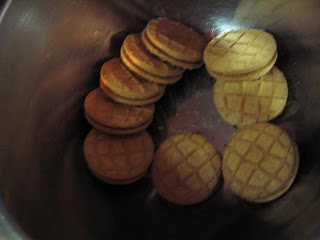 These are the half box size kind that you can get in a certain kind of convenient store. It's the whole package of them. Well, most of a package, anyway. Heh. You could use any kind of cookie you wanted, I can't imagine any would be bad. Oreos, chocolate chip, even some kind of fruit jelly ones. It's not hard to find a match for peanut butter. Then I crushed them up 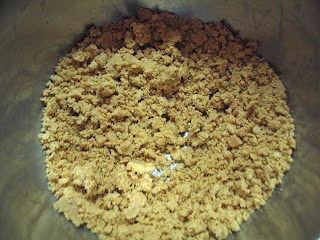 and added the powdered sugar and oats. 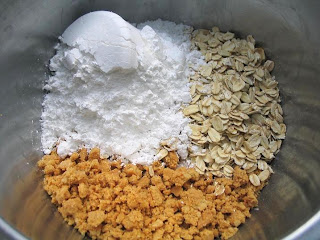 Mixed that together and set it aside. 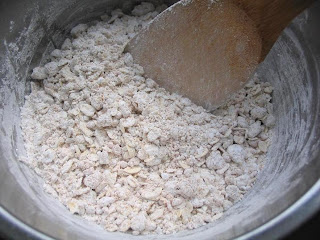 Then I melted butter. 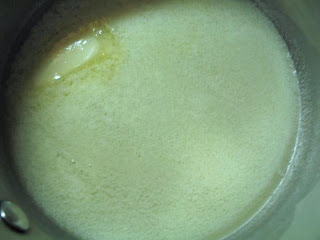 Sweet, sweet butter. Well, salty butter. I used regular salted butter so I wouldn't have to add salt. Pretty clever, eh? Once it was melted I added the peanut butter 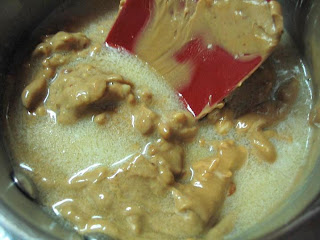 and stirred them around till they were combined in a peanuty buttery goo. Then I poured that into the dry ingredients. 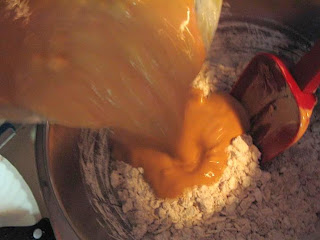 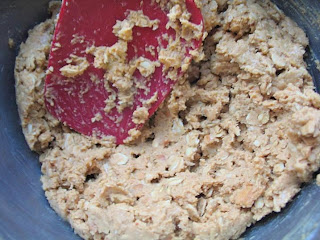 and spread it into the prepared pan. 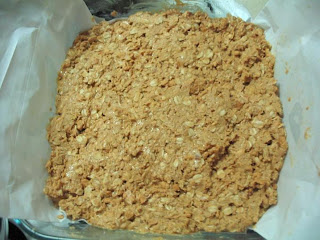 With lots of differences in lighting. Apparently. The pan had been prepared by spraying it with cooking spray and then lining it with a strip of parchment paper that hung over two sides a couple inches forming a kind of sling. And after that big run-on sentence I don't have any pics to show you what I meant. Hopefully you understood. I also couldn't spread the mixture with anything but my hands, it was just too thick. But it's also not rocket science so I spread it kind of evenly and tossed it in the fridge. After fifteen or so minutes I melted the chocolate. Now here's the thing about the chocolate for this, I'm not going to tell you what kind to use other than good eating chocolate. Want dark? Dark chocolate goes well with peanut butter. Milk? Sure, it's always tasty. White chocolate? If that's what you're into then go for it. All chocolate goes well with peanut butter. I'm pretty sure that's written somewhere. Anyway, I'm melting some milk chocolate since that's what Girlfriend likes. 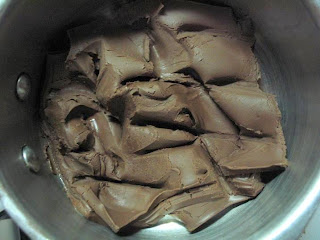 The stove isn't on yet and that chocolate was in air conditioning not too long before this. I hate the heat. Give me winter any day. But that's neither here nor there. I melted the chocolate and spread it onto the chilled peanut butter mixture 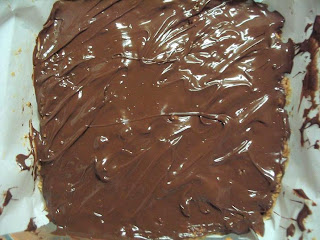 then tossed it back into the fridge. Left it in for about a half hour then pulled it out. 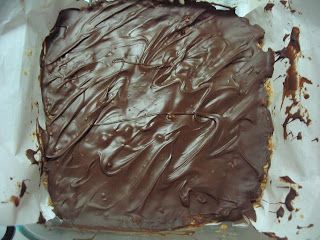 You could just hack at it with a carving knife or break it up like bark. If you are going for the rustic look. I wanted to be fancy so I ran my chef knife under hot water for a minute then wiped it dry. Then when I cut into it I got fairly neat lines and weird little melty chocolate edges at the top. 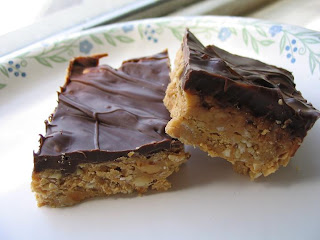 I can do rich. Rich is great! Chocolate and peanut butter is one of my most favourite flavour combinations!

The monopoly man dipped in cheesecake...I need to ponder on that for a while....

mmmmm...I LOVE Nutter Butters :) These sounds killer to me!

This is perfect for a cooking project with my daughter - yum!!! Thanks for sharing this!

I made a version of these the other day, but yours are way better!!!! Mine pale in comparison. I couldn't be trusted around these, they would magically disappear, and fast!

You had me at No Bake....then really sucked me in with the chocoalte - peanut butter combo! YUM!!! Nutter Butter's are going on my shopping list :)

Smiles all around for a baked good with Nutter Butters. Yum. Saw your awesome picture on Tastespotting too. Niiiiice!

I saw these on TasteSpotting also...they look great!
Love your step by step!

Ok, Nutter Butters are my absolute FAVE!! I would kill for these!

Yummmm. If you have any left, feel free to bring them when you come over tomorrow. :)

Wandering Coyote: Then you should try these, they are the bomb.

noble pig: Let me know how that goes for you. ;)

5 Star Foodie: This is a good one to do with kids, I didn't think of that. Let's them get their hands dirty. Heh.

Reeni: Thanks! I thought I would eat them all at once myself, but I couldn't. And I tried! :)

Danielle: Heh, thanks. This was my first no bake recipe, really. I was really pleased with how good they were.

duo: Thanks! I've been having a bad run there, not getting any of my pictures accepted. It was nice to get one posted.

MayBe: Thanks for stopping by!

I like all the recipes u make and share with us. I once tried banana bread after seeing from ur site and it was so good. Thanks for sharing with us.

I have bookmarked the recipe but I don't know if I can find the Nutter Butter cookies around here. It's been ages since I've had a good look at my local cookie aisle, though.

It's been years since I heard of Nutter Butter cookies... maybe they don't have them on the west coast. No-bake recipes are great to have on hand and they're great for kids to make, too!

You know a way to my heart and it begins with PB and chocolate!
LOVE it!
Great recipe, can't wait to give it a go.

very good times! you know my love for pb & c. And that's a might fine crust you have there.

I can imagine how rich and sweet these are. I'd have to switch up the nut butter (allergy) and cookies but I have got to make these!

These remind me of a Martha Stewart no bake recipe I've made, but way quicker. The BF will most definitely like these. Will add nutter butters to tomorrow's shopping list.

I think my guys would really dig this!

When I went to the US in 2003, my American cousin's grandmother made something similar to these and I got up in the middle of the night to steal a piece from the fridge. Now, 8 years later and back in Norway, I finally made them and I hate myself for it, for how can I stick to my healthy lifestyle with the knowledge of how to make these? Thank you for a great recipe :)