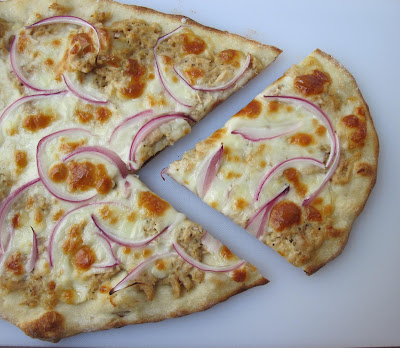 It's exactly what you think it is. Unless you don't think it's awesome, then you're wrong. Heh. For those of you who remember when I posted about my tuna melt calzone the concept won't be especially new, but I figure it's different enough to post about.

This here is just tuna salad, spread on pizza dough, topped with cheese and some red onion. I left the onion out of the salad, since I was putting some on top. 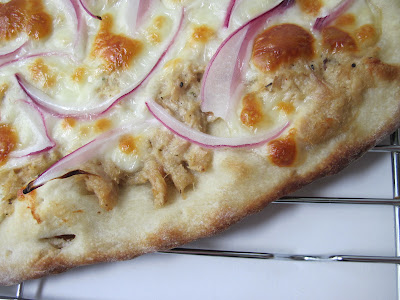 Next time I do it I'm going to make the salad a bit saucier to make it spread more easily and evenly. But probably not with mayo, too much mayo is too much. 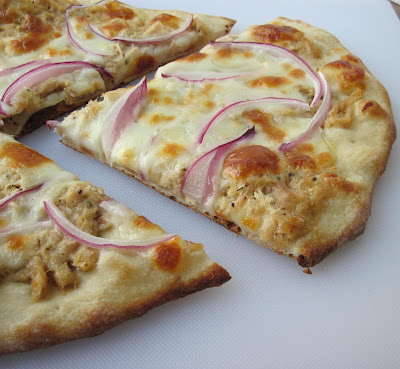 I've been doing a lot of non-standard pizza lately so expect some more over the next little while. 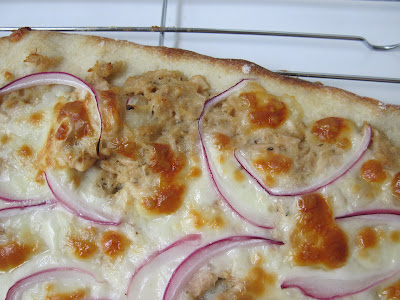 These are the type of pizza I like too. Very thin, and crunchy crust.

Interesting!! I have to say I don't think I would have ever considered this pizza combo!

Who says you have to enjoy a sandwich in a sandwich form, right? Mmmm...Maybe that's a trend worth starting. hahaha...

now this is a tuna melt i would devour and i hate tuna melts. oh yeah! or as you say "wicked!"

This is about as untraditional as they get! I love tuna melts and I love pizza - so this is love! I bet some olive oil mixed in the tuna would be good too.

This totally appeals to me! A tuna melt isn't good unless the bread its on is crunchy - your pizza idea is awesome!

That is a totally awesome pizza!

My favorite too! Thin pizza is awesome, love the onions, still look so fresh!

looks yummy! looks really fresh and light. i love how the red onion gives it that pop of color.

I love pizza with crazy toppings. And mixing and matching between calzones and pizza. Delicious!

Hmmm, I'm gonna have to pass on this one. I can't do warm tuna at all. It looks really nice in the photos, but I know I could never get past the pictures of it :(

A brilliant idea! I make homemade pizzas often, put everything under the sun on them, and am a big fan of tuna melts also. This recipe is a definitely keeper! Stumbled.

I used to order tuna on my pizza when I was in college...this is much better. I love tuna melts...a tuna melt pizza is making me crazy hungry.

Simple and delicious! I am glad you are back blogging!

I would love this!

Sweet! I'm so trying this one! Maybe a spicy sauce of some kind would be good too.

Whenever I make something like that, my husband won't allow me to call it "pizza" so I have to refer to it as a "savory tart". LOL!

What dough did you use? I'm making pizza tonight!

This is a really interesting idea. Your pizza looks really delicious and usually what looks good also tastes good. I am new to your blog and spent some time this morning reading your earlier posts. I really like the food you prepare and will be back often to see what you've been cooking. I hope you have a wonderful day. Blessings...Mary

Jen: I use this dough.

Sounds and looks good to me. I support the idea of a regular pizza post. Do it!

Now this is a first. Who needs a sandwich if you can do it with pizza?

You ought ot make it a regular feature. Man, I love a tuna melt and to make this on pizza...mouthwatering....