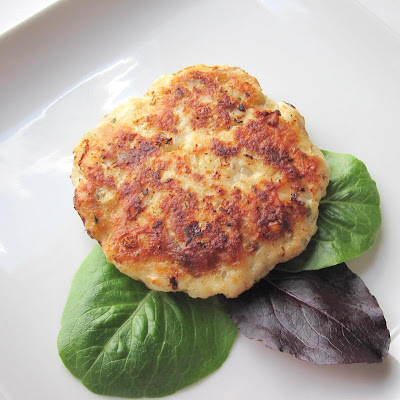 Pulse the fish in a food processor until coarsely chopped (or use a knife, if you're like that). Mix everything together, form 1/2 cup scoops into cakes and fry over medium/medium-high heat for about five minutes a side. Each side should be nicely browned. Serve hot.

So, I'm back. But I'm afraid I'm not going to be quite as present in the blogosphere as I was before. See, part of why I took a break was a bit of burn out. I was spending large chunks of time every day reading, commenting and (this one is the killer) stressing the numbers too much. We've all heard the song before, I got caught up in all the glitz and glamor of food blogging that I forgot I was really just doing it for fun. Heh. So I'm going to go back to just having a good time and not worry about posting on a schedule, commenting on every blog I read or getting my pictures accepted by any of the food photo sites.

But none of that is here or there, I'm here and posting and I'm sure you kids hit that link for the fish cakes, not to listen to me complain about my lack of perspective.

So, let's talk about fish cakes. I made them on a whim, I had a mahi mahi fillet that had been sitting in the freezer for some time and it was starting to get a little freezer burned. I figured doing something where it got chopped up would probably be the best bet for rescuing it, so I decided to make fish cakes. They came out really well, especially considering I had never made them before. I looked around the net, got the general idea of how they're done and whipped these up. The recipe up top isn't exact since I only had one fillet, but it was about 1/3 of a pound so I did a little math and I'm sure you'll get something similar and tasty if you follow it.

And since this is my comeback post I even have step by steps of what I did. Can you handle the excitement? Heh.

Now, before I did anything I realized I had no bread crumbs. Which in and of itself is a refreshing change of pace, usually I find out I'm short ingredients after I've already started. So I just made some, fresh is really better anyway. 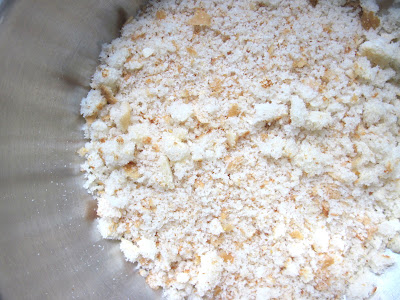 Then I cut the fish into big chunks and whizzed it around in the food processor. 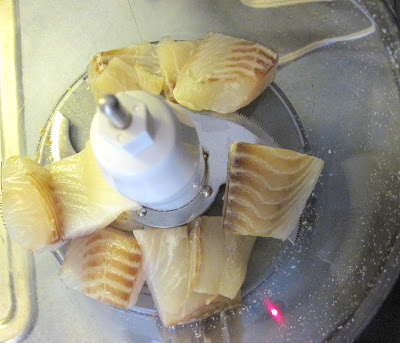 I know, the light makes the fish look weird, but pretty much the only outlet I have in my kitchen is right next to the sink and the light there is... flawed. As you can see. Anyway, next time I'm going to whiz the fish a little less to get bigger chunks. 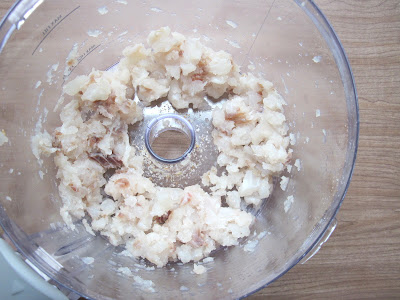 I think that would be better. Then I just tossed it all into a bowl, 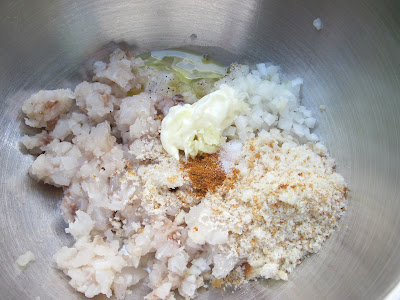 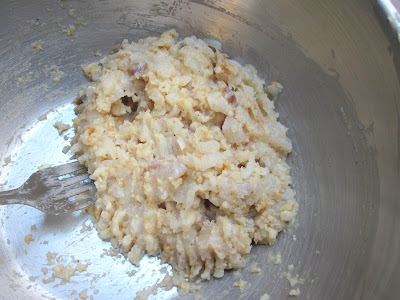 formed cakes and fried it in more oil than was really necessary. 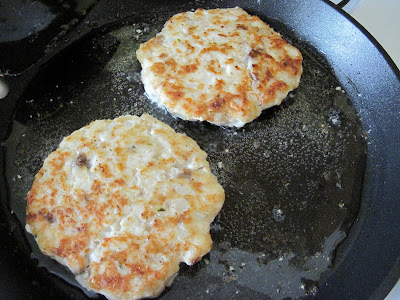 They were wicked good. 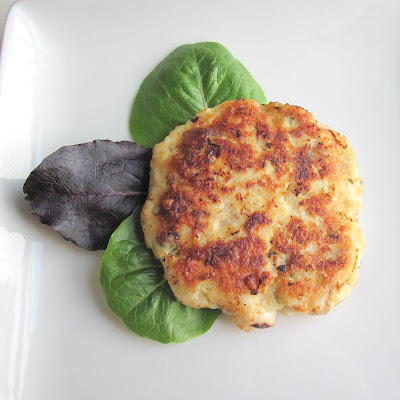 I made some hobo tartar sauce with just mayo and relish, but it wasn't very satisfactory. I'm going to have to find a recipe for it and try again. Anyone have an awesome recipe they want to share?

Anyway, there it is, fish cakes take one. 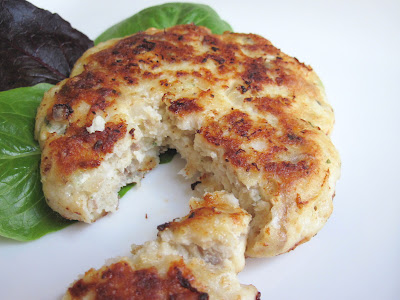 There will be a take two and I'm going to bread them next time. Maybe I'll even make fish sticks, my girlfriend would like that. That's pretty much the only way she'll eat fish, even canned tuna is too much for her. Heh.
Email ThisBlogThis!Share to TwitterShare to FacebookShare to Pinterest
Posted by Bob Labels: fish at 6/14/2010 10:01:00 AM

Great to see you back, Bob. The fish cakes look awesome.

I know exactly what you mean about "blogging burn out". I started my blog after reading other people's. They made it look so easy...and then reality sets in. Blogging is not easy. I was constantly on the look out for "new and original" recipes, spent hours mauling over my posts to make sure I'm funny and interesting enough, yadda, yadda. Then when the numbers of visitors or comments weren't being generated like I had hoped, it made me feel really shitty. So I'd end up taking a month off here and there. I completely understand where you're coming from.

The Fish cakes look AWESOME Bob! YUM. Glad your back... :) and I completely understand.

Delicious! I adore a good fish cake. I know what you mean about burn out. I just can't keep up and often just don't even try. Just do what you can for your own blog and leave it at that. Best wishes.

Delicious fish cakes!!! It's good to have you back again. Once of things I set for myself was to have fun with it and not worry about other things. Definitely take your time. If you feel the need to post, then post it. The blogosphere isn't going anywhere any time soon. :)

I for one cannot handle the excitement. First and foremost of you being back! Second of this awesome recipe. It looks so delicious.

Oh! Your fishcake looks delicious...I never made it...love the way you presented :-)

Those fish cakes look fantastic. I do the same with the tartar sauce--keep it simple. Maybe add some lemon juice or fresh lemon peel? I add a teeny dab of horseradish, too; but just enough for a seasoning, not enough to burn your face off.

Cooking in more oil than is necessary is DEFINITELY always the way to go. Welcome back.

A very nice fish recipe to kick off your comeback:D I like that, and welcome back. Miss seeing your cats' antics.

Glad you're back to cooking! Especially with fish cakes. Blogging shouldn't take over your life at all. Just enjoy your food and share whenever you want. :)

Welcome back! Fish cakes look great. I bet the cats went crazy when you were cooking them!

Blog for yourself - not anyone else. I think of my blog as my food diary/recipe book, and a way to share with friends.

yayy you're back! can't wait for some Sunday Cats too! ;)

welcome back! really yummy looking fish cakes, I like that you used fresh fish fillet to make it. I know what you meant about burnt out. For me, priority is to create new content, I check my web stats once a month, and I comment when I have some free time and I skip that when I'm busy.

Graet to see you back! and I do agree with you, blogging does take up a lot of time!

You see...everybody is glad to see you back. So stay with us if you can.
THe fish cake looks so yummy!

Glad to see you back online! The fish cakes look yummy!

I have been there too! I had blogger burnout a few months ago - had to scale back on the commenting...and the stressing out...I was a slave to my computer for way too many hours in the day. Glad your back to posting!

Your fish cakes look really good! I could totally love these. I make tartar sauce the same way with a squeeze of lemon added in.

To respond to your camera question - I bought a new camera before Christmas and I'm just figuring out what works best - it's a fussy thing! Thanks for your compliment.

They look wicked good as well! It's good to have you back. I love your fish cakes and will try them for lunch one day. Take care. Blessings...Mary

I can't remember if I commented on this or not? Anyway I totally understand blog burnout. It happens to me every few weeks. Just keeping up with all the great ones--it's fun but it takes a lot of time! But, I am glad to see you are back. I like your blog.

i missed your food, sarcasm, and use of the word 'wicked.' welcome back, bob. :)

Hey Bob,
I'm coming out from the shadows myself...I lurk now and then but I'm not posting much of anything these days either...

I'm coming out because your patties inspired me and I made Ahi Tuna patties...the tuna was frozen and simply not up to par for seared tuna so I made the patties...

used fresh dill from our garden instead of parsley...really nice.

Thanks kids! Always glad to know I'm not the only one. ;)

monicajane: Nice! I'm thrilled you liked it. I bet the dill was a nice touch, I'll do that next time.