Making burgers this weekend? I suggest trying out these. In fact I can't recommend them enough, so I won't bother trying. 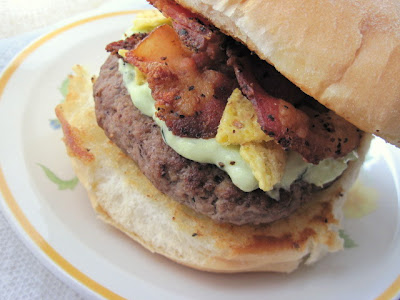 Kind of says it all, huh? I'm going to do some talking anyway, of course. Heh.

So, there was a place down the street from my apartment that used to make a kick ass bacon-guacamole burger. This thing was the bomb, plenty of bacon, good guacamole... I think there was lettuce or something in there... But it had bacon and guacamole and it was awesome.

One day my girlfriend goes down there to get us some and they just don't make them anymore! No explanation, no apology, no offer of a handful of coupons to loyal customers, nothing. I had to settle for a barbecue bacon burger.

Which was also good.

But it didn't have guacamole! So when my girlfriend came home from the grocery store with some guacamole and some thick cut pepper crusted bacon I thought, "You know, I could make a bacon guacamole burger with this stuff." And I did. 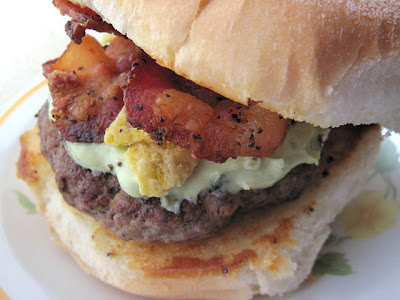 And it was better than the ones we used to get down the street. The sauce is equal parts guacamole and sour cream, plus some fresh cilantro. The burger itself had a little (but not that much, I didn't want it to overpower the sauce) cumin, onion, garlic, cayenne, salt and pepper in it. I also toasted the bun in the pan I had cooked the bacon in so it was crispy and delightful.

Tossed some crushed tortilla chips on there too. This was one of the best burgers I've ever had and I've eaten a lot of burgers. So it's not really a recipe (I don't have any measurements), but if you like burgers you should definitely make one of these. Just adjust everything to taste. 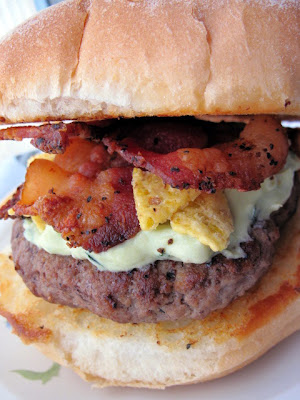 They're wicked good.
Email ThisBlogThis!Share to TwitterShare to FacebookShare to Pinterest
Posted by Bob Labels: repost at 6/30/2010 08:00:00 AM

Bacon burger with GUAC! Priceless. I can't think of any type of burger toppings I'd want more.

I hate it when eateries removed certain dishes without consultations! Your burger looks very tasty!

Just this weekend my husband wanted guacamole on his hamburger. Unfortunately he realized this while we were in the middle of devouring our home made guac with a bunch of tortilla chips. It was too late--the guac was gone, but his dream of guac on a burger may rise again when I show him this.

I have not tasted guacamole before, can you believe that? Bet it's very good seeing that you are singing lyricals about it:D And from the look of that burger, it's got to be awesome indeed.

That looks great! I love a good burger.

That's similar to my favorite burger... you just need to add a fire roasted poblano pepper and some crispy fried onion strings!

i swear guac is made for burgers.
have you ever tried pimento cheese burgers? i want to so badly.