What To Do With a Mountain of Taco Meat? Taco Fries! 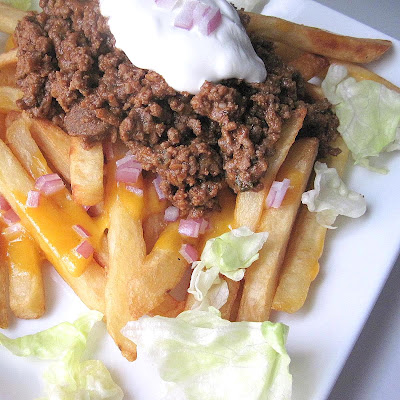 Like chili fries, but with taco meat. Some red onion, cheddar cheese, sour cream, fresh cilantro, a little lettuce to make it healthy and... yeah. It's awesome. I'll be making it again and again. Probably fairly soon. 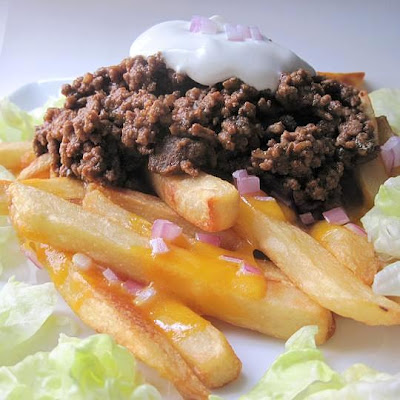 Heh, see, I made two and a quarter pounds of taco meat the other day. I had this big chunk of frozen beef and didn't feel like dealing with hacking at it to get a more reasonable amount, so I just did it up. I still have one and a half pounds or so that I didn't finish in the freezer. I made burritos with it too, I'll post about those some other time. I'll probably make a casserole as well, taco casserole is a good time. 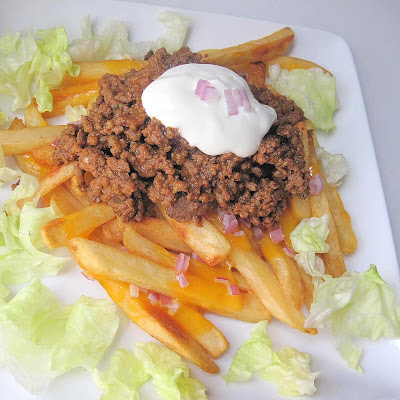 I'd give you guys the recipe, but I didn't really have one. One thing I did though is I used about a half a cup of chicken stock in it. That gave it some richness without fat, it was really good. I also used a small can of tomato sauce, garlic, cilantro, cumin, paprika, chili powder. You know, Mexican style stuff. I think there was more in there too, but I really can't remember. Some day I'll do it with just one pound and get measurements so I can post it for real. Anyway, I strongly suggest you do it with your favorite taco meat recipe.
Email ThisBlogThis!Share to TwitterShare to FacebookShare to Pinterest
Posted by Bob Labels: beef, cheese, mexican-esque, potato at 2/01/2010 07:00:00 AM

How interesting and creative! I would have probably used them for a pasta dish or make some taco meat filled spring rolls.

I’ve been really into trying all different methods for making meat lately, this will have to be next on my list!Thanks for sharing..

Yum! Those look good! I love cheese fries or tots heh. And taco meat is delish, but I usually pig out on nachos and never have any left. Heh. I could live on nachos.

YUMMMM! they're almost like chili cheese fries, but not!
DELISH!
-Mini

Mmmm, Fries With Stuff. I even think my definition of "chili" is even sufficiently vague to call these chili fries.

I'll eat any kind of fries, anytime, any place.

Oh good lord this would have gone with the tacoritos....snap.

nice solution - put a little more cheese on mine and load me up!

Delicious and creative. You'll have to try poutine soon!

Those remind me of San Diego..they are everywhere down there..but with carne asada..they look great Bob!

What a genius idea! I love chili fries...but am the only one in my family. They will LOVE these!

This looks totally awesome!! and the best part? I have leftover taco meat in my fridge!!! WOOO HOO. you may have solved my dinner dilema :)

That looks absolutely delicious! And I have leftover taco meat and stuff. Yay!!

Nice. I love chili cheese fries, and I love tacos -- so I feel right at home with this one. ;-D

I love that you made this! How awesome and creative!!!

My daughter would love this!

Looks awesome! I'd probably fry rice with it. That's what I do with leftovers =P

OK, I am officially dead. You have killed me with this awesomely tempting dish. ;)

I would stand in line for this. What a great recipe!

oh my my my my..these look completely EVIL!

Oh my gosh! Talk about refraining from licking the screen. My boy wants me to make that now...minus the lettuce. lol

Very creative and actually quite addictive!

Don't those look like the tastiest fries ever - yum!

Wow my kids will definitely go crazy over this... they love taco and fries...omg yours look droolicious

that looks even better than in-n-out fries in animal style :)~