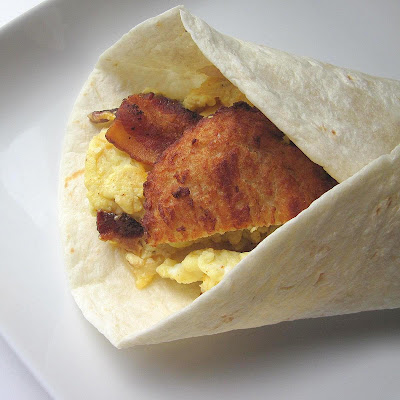 See, I don't want to do a lot of stuff when I first get up. Frying bacon and scrambling eggs is about my limit until I've been up for several hours. I can only even do that much because scrambled eggs are the easiest thing in the world to make and I just love bacon. 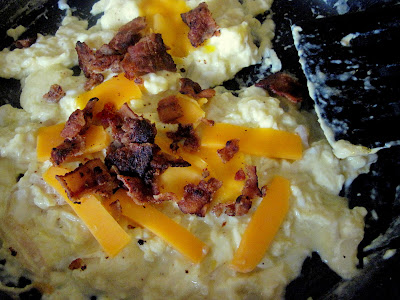 But, I can toss some frozen potato pancakes in the oven and slice some cheese, too. That's not so bad. Mix it all together, 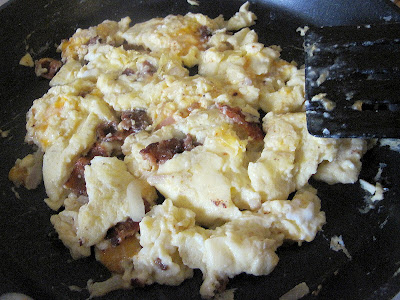 put it on a tortilla 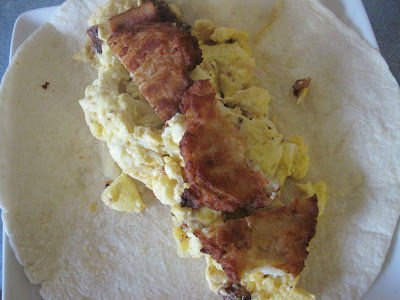 and there it is. 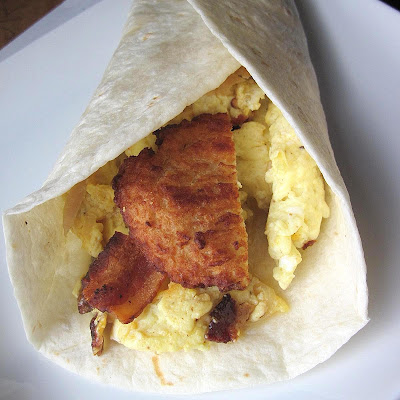 Not to mention that this whole thing takes maybe twenty minutes. Maybe (and most of that is waiting for the potato pancakes). And in that same amount of time you can make one breakfast burrito or many. It doesn't really take that much longer to scramble eight eggs than two or cook twelve slices of bacon instead of three. Or however much bacon you put on it. I like lots. Assuming you have a big enough pan, of course...

But, I would have loved a jalapeno in there. Or salsa is always nice. Broccoli, onion, asparagus, peppers, all of that would have been good. I suppose you don't need bacon in it... but I have a hard time getting my head around the idea. Heh. So who else out there makes these? What do you put in?
Email ThisBlogThis!Share to TwitterShare to FacebookShare to Pinterest
Posted by Bob Labels: bacon, breakfast, cheese, eggs, potato at 2/11/2010 12:37:00 PM

I would pay for your breakfast burrito, it looks so good!

That's a rather quick and nutritious breakfast!

We have breakfast burritos a lot. I pretty much use whatever is in the fridge. Made some last week with egg,onion, diced pepperoni and potato. It was so good I made another one the next day! We usually have some kind of meat leftover from dinner that gets chopped up and goes in burritos, too. Oh, and cheese... can't forget the cheese :)

These sound awesome. I dont eat pork though, what would you suggest i can use instead? I am thinking mushrooms....

Totally following you now by the way lol!

Karen: Ooo, pepperoni would be awesome for this.

Fortunas: Thanks for following! :D Hm, well, they make turkey bacon thats pretty good. Heh. Or chicken/turkey sausage, mushrooms (if you like them) can take the place of meat sometimes.

My mom eats vegetarian breakfast "sausage" sometimes, she says it's good. Anything you like, really.

yep I'm with you on this one. I make these way in advance for me and the hubby, store a bunch in the freezer for the week to come. I love that one can put anything in these bad boys.

I like mine spicy. I would add some chilis.

bacon is needed here and should be essential.
mmm.. it does look good. I think I might me tempted.

I had the very same thing for breakfast this morning minus the tortilla. It would have saved me a plate and fork.

love the breakfast burrito! Any time of day...

Oh good lord, I want one.

I want that for breakfast tomorrow!

Seriously, this puts my yogurt and granola to shame. This would tide me over until dinner!

And all in a handy wrapper you can take with you if you need!

We started eating breakfast burritos after we visited my husband's family in Texas and he showed me this amazing restaurant chain called Taco Cabana. The key for me is really amazing, fresh pico with lots of cilantro!

These look great - it would blow Jack's mind if I made him something like this for b/fast. Reading everyone else's suggestions is fun too. Thanks!

How I wish my breakfast is like this isntead of just cereal!

This is WAY better than anything at a restaurant...yum.

I love anything with bacon, eggs, and cheese. I used to get that on a kaiser roll every morning while I was in junior high school. This looks just as delicious. I could definitely go for some broccoli thrown in!

Usually I just have eggs and cheese in mine - sometimes bacon if I'm feeling motivated - or someone else makes it for me. Love yours especially with taters.

Anything wrapped in a tortilla is good--especially for breakfast! I actually tried one of those Big Mac wraps the other day (shame on me--I know) and it was pretty tasty. You are right, though, homemade is the way to do it right!

That pretty much covers it...eggs, bacon, potato in some for or another and cheese....lots and lots of cheese!