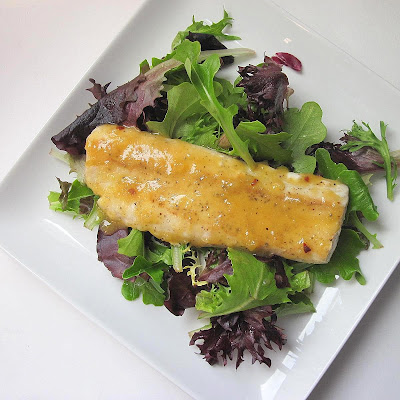 Combine everything but the fillet. Cook the fillet in a nonstick skillet over medium high heat for 2-3 minutes a side or until flaky and opaque. Remove the fish from the pan and pour in the sauce. Let the sauce reduce at least by half and then pour over the fish. 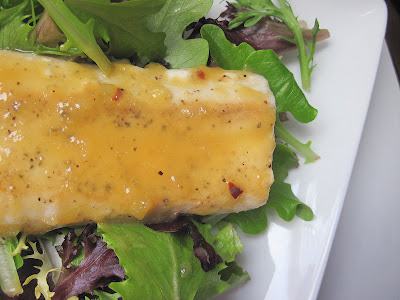 And it was good, too, dammit. Heh. For those just tuning in, I'm not really into fish. But I really wanted to try it again since it's healthy and I want to eat better. I blame my wanting to try it again on Jenn, she's always making fish and it always looks so good.

I think the main reason I'd been avoiding fish (that wasn't canned tuna) for so long is that my dad is a huge fish fan. That in and of itself is no biggie, me and my dad get along fine and I don't have any juvenile need to rebel against things he likes. But you see, the fish he likes is, well, stinky. He likes the fishiest fish he can get. And he would sometimes heat it up in the microwave which made the entire house stink. Kind of turns a dude off from it. So when I decided to try it again as an adult I went for the one of the least fishy fishes I could find, mahi mahi.

I also decided to keep it simple. A nice orange ginger sauce, just a few ingredients and an easy cooking method. It came out quite well, if I do say so myself. 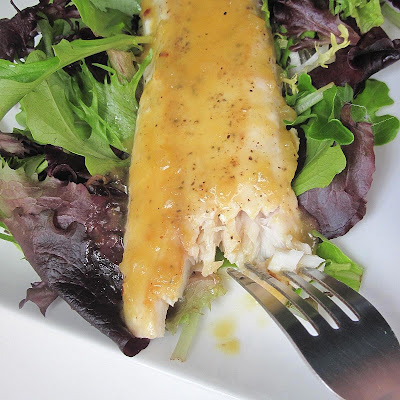 The greens are actually one of those premade salads from Trader Joes but I'm afraid I don't remember which one. Despite the lovely plating it all wound up getting stuffed into a pita. 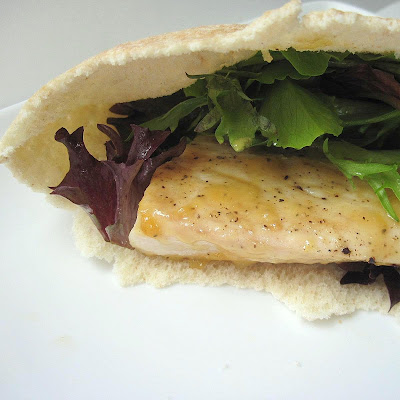 It's easier to eat in front of the computer that way...

So, fish. I like some of it, apparently. Expect to see more. I still don't like tofu or mushrooms though and I don't expect that's going to change any time soon. Heh.
Email ThisBlogThis!Share to TwitterShare to FacebookShare to Pinterest
Posted by Bob Labels: fish at 2/22/2010 07:00:00 AM

Orange ginger sauce sounds so great! I am a big fan of mahi mahi too! I can't wait to try this! :)

I had to laugh about "fishiest fish." People always say that and I'm never sure what that means...isn't all fish fishy? And I'm a fish lover.

Anyway, great job, welcome to the fabulous world of fish!

Hooray for fish! I agree with you about the tofu, though :)

That's a great flavourful main dish salad!
My man hates fish and other seafood...too stinky. The only fish he can eat once in a year is the bread crumb encrusted fish fillets, and they have to be served with fries.

Sook: Thanks! Let me know how it turns out for you.

Hungry Dog: Thanks, my girlfriend picked out the plate. Some fish has a more pronounced flavor is all. ;)

Vicki: We should get buttons made. :D

Angie: That's the next way I was going to make it. Heh.

I love the combination of orange and ginger together. And I love fish. All fish. Any fish.

Since you're hitting up Trader Joe's, try the frozen Chimi Churri Salmon. Insanely good, cheap, and only 5 minutes on the grill.

I'll be trying your orange glaze tonight I think!

My mum keeps telling me that I should try cooking some fish - this looks like such a delicious recipe I think I am inspired :) The sauce in particular looks wonderful (plus I'm still with you on the anti-mushroom)!

Wow, what a fresh and fascinating recipe for fish! I love these flavours.

I happily accept the blame for it. Hehehe...

I'm glad you tried fish again. See it ain't so bad and it's good for you. And look you're turned ou quite well. I love the glaze you paired it with. I'm expect to see more fish here now! Fish rocks!! ;-D

Sounds good, and great pics! I'm on your Dad's team... I think fish should taste like fish... never met one I didn't like ;)

Bob, you are making me hungry! I really enjoy fish and wish we ate it more often, butI have two picky eaters that aren't big on fish at all.

Tilapia, orange roughie and halibut are good to try. They don't have a strong taste or smell.

Joanne: Thanks! Yeah, orange and ginger is one of my favorites.

Brett: Man, I wish I had a grill. Heh. I'll keep an eye out for it though, thanks! If you do try this let me know how it goes for you.

Lucy: Awesome, you should definitely try it! :)

Katherine Aucoin: Thanks! And thanks for the tips, I'll keep my eyes out for them.

What a fantastic combination. Orange and ginger must be really delicious for mahi mahi.

very nice! I love my mahi mahi in the summer on the grill.

Bob, this looks like a perfect portion! I am trying to eat better as well. We can be cohorts in portion control together (and yes, exercise too)

I think this looks amazing. I'll be giving this a try for sure.

I don't like tofu either - ugh. I think this fish looks perfectly cooked and the orange ginger sauce sounds great.

Just today I was craving salmon with orange and ginger. I've been seeing fish everywhere too. This looks awesome! Love the flavors.

Looks absolutely delish! Glad you liked the fish. My only wish is that I could have tasted the dish... and NOW I will dispense with the unintentional rhyming ;)

I totally understand the aversion to Tofu...

I love the way u cook your fish! no fancy sound mahi-mahi fish here:( and I am not partial to tofu either even though people said it's very healthy.

I love seafood. The ponzu sauce is a nice touch. This is an nice alternative to the usual blackened fish.

Oh! This looks like a fantastic recipe, it's very Hawaiian with the sweet orange juice, ponzu sauce and ginger. I want to see more fish!

I LOVE mahi! That looks so good!

Oh this is nice, love orange and ginger together!

Bob, like I said, I can totally see how Marmite could be disgusting, but something about it is just extremely appealing to me. Hmmm...this doesn't bode well for other areas of my personality does it? :) Thanks for visiting.

Funny story about how you didn't used to like fish heheh. I'm scared of "fishy" fish too, so I will look out for mahi mahi next time :)

Bob, this looks wonderful. I love it that you de-plated it and pita-ed it. Me, I'd slather some samurai sauce in there. But then that would kill all that lovely orange ginger taste...

This sounds delicious! I tried mahi-mahi for the first time a few months ago and fell in love with it. Orange ginger sauce sounds like the perfect accompaniment to such a great fish :)