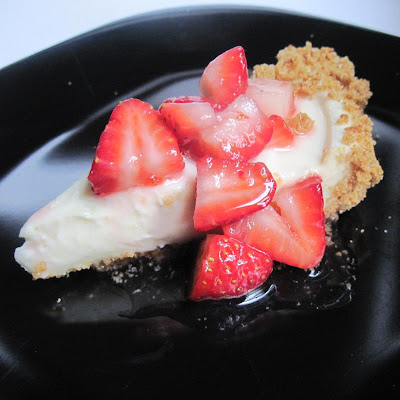 Beat cream cheese until fluffy, mix in everything else. Fill the crust evenly, cover it with plastic wrap and chill for at least 3-4 hours. Serve with the topping of your choice. It will keep, covered in the fridge, for at least 4 days. I can't say for sure past that as I've never seen one last any longer.

First, a warning. This is some seriously rich, sweet stuff. Really. But I loved it when I was a kid (still do, it turns out). For a long time I even went so far as to have it on my birthday instead of cake. Of course that decision was helped by the fact that I had already had cake twice in the last couple weeks because of siblings birthdays. Not that I didn't also love cake, mind you, but after so much of it you sometimes want a change of pace. I suspect my mom appreciated it too since all her cakes were made from scratch and this is really, really easy. Heh.

Unfortunately I really didn't get many pictures of it. In fact I only got the one up top, this one 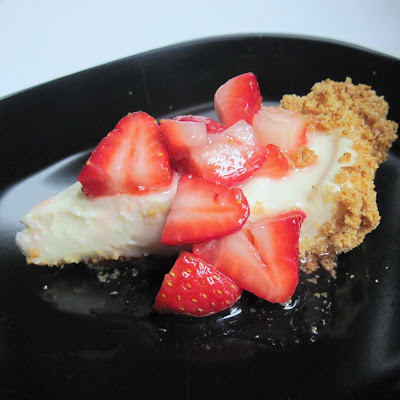 and one at a slightly different angle. I'll put that towards the bottom, to pad things out a bit. The reason I didn't get many pictures is because it got eaten pretty quickly. See, my girlfriend loves it too. 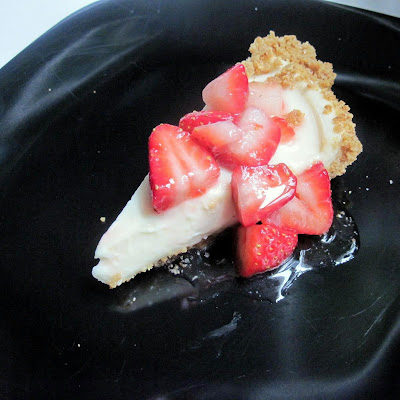 Or hot fudge, whipped cream and nuts. Or some kind of caramel concoction. Rum caramel sauce would be particularly awesome, I think. I've also thought of doing a layer of chocolate on the bottom or cinnamon in the crust. What do you guys think, what would you put on it?
Email ThisBlogThis!Share to TwitterShare to FacebookShare to Pinterest
Posted by Bob Labels: cheese, comfort food, dessert at 2/18/2010 07:00:00 AM

the hot fudge sounds good to me!

i've never made a no-bake cheesecake, nope never. why? to be honest, i always thought they would suck, but i think you've changed my mind.

yum, this looks quick and easy. And I don't like cherry pie filling (or even really cherries at all) so I love the optional toppings you listed instead!

This looks gorgeous!
I like to make no-bake cheesecake in summer. Next time I will use sweetened condensed milk for the cake too. A very clever choice.

I love the idea of no bake cheesecake, although I never really tried it myself. Now, I got a proof that this can be as good as it is baked.

like the no bake aspect of this... and I would take the caramel sauce!

I love that you can just throw this together!!

Easy and super tasty...hard to beat!

Thanks kids! You know what else I thought of that would be good is a layer of jam or fruit between the filling and crust... crap, I need to make this again.

An awesome easy version and looks perfectly decadent! I will give it a try with the fat free condensed milk I have in my pantry!

Strawberries on it look just perfect to me!

Isn't it great that sometimes we get some good recipes from the package. hehehe... I'll have to try making this version. No bake = good!!

Ah, how perfect! I love cheesecake but hate the fuss! I am definately trying this recipe soon! Easy and no baking?!

My mom used to makes this too! Wow, I forgot about this and I always bake mine, but not anymore!

Since I'm dreaming of Jimmy Buffet music and tropical drinks, theis would be good with a thin layer of lemon or lime curd too.

oh what a nice recipe! I love this no cook version :)

Mine always turns out kinda "spushy" because I don't let it chill long enough so when I cut into it, there's a little bit of a cheesecake landslide, and the pieces aren't that pretty. Props to you for being able to wait long enough before slicing it. Did you have to leave the apartment for 3-4 hours or what?

Mmm I love cheesecake - this looks delicious! I love the strawberries on top, and the base layer of chocolate idea has me hungry!

Mmmm this sounds perfect for one of those days where you really want dessert but don't feel like baking. I think that caramel or dulce de leche sauce would be amazing on this!

I love the idea of no bake cheesecake, it looks good!

This looks awesome! And it's so easy you gotta love it. Caramel for me please!

Oh, see, this recipe had me at "cream cheese and condensed milk". Two great baking essentials in my book.

Yummy looking pie! I think I like fresh fruit on it, too. Never did like canned cherry pie filling--except when I make a hot fruit compote out of it (but then there are other things in it).

you make it look really easy to make no bake cheesecake, and the end results look delicious as well :)

nice! I love the idea of spicing of the crust. I once made lemon cheesecake and popped in chunks of chocolate.... soooo good!

I agree with Dawn. I've never seen a no-bake cheesecake that looked This good! Thank you for sharing and possibly canceling out my run. :D

My mom makes this for my dad every Valentine's Day. It's tradition. I made it a while ago and then we all got sick and didn't want to eat. It lasted a whole week and still tasted great!

I was planning on sharing this recipe on my blog, too. Guess now I don't have to. :P

I like lime zest in cheesecake and a gingersnap crust. As a kid, I always asked for pumpkin pie rather than cake for my birthday.

Bob, you're killing me! This reminds me of Key lime pie, but without the eggs. Or the limes. Hmmm...maybe it doesn't remind me of key lime pie after all. It reminds me of Bob's cheesecake!

Thanks for the recipe!

This looks so good! I love alternatives to traditional birthday cake. :)

Problem is that no-bake = no willpower. You said it yourself: it goes so fast, there isn't even any time to take a picture! But this recipe is great for those tart sauces like rhubarb or raspberry that really balance out super-sweetness.

i made this last night in muffin tins.

it was delicous. thank you.

This is my husbands most favorite dessert!

i was wondering how many serving are made from this amount of ingredients?

Crystal: I'm afraid I don't have specific numbers for it. It's made in a pie dish, but is really, really rich. I bet you could easily get 12, maybe even 16 servings out of it.

I will be trying this recipe in a few minutes, can't wait to taste it! I usually bake mine, and currently have my oven on, but cannot bear the thought of leaving it on for another hour when it's 95 outside already! I normally make my own graham cracker crust, and add cinnamon and crushed walnuts to the crust! Very rich but very good! Peach or apple pie filling is a nice change as well!