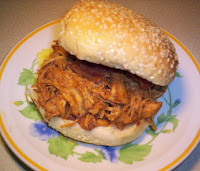 Brown the chicken in a medium pot. While the chicken in browning mix together everything else except the barbecue sauce and bacon. Pour the broth mixture into the pan with the chicken. Simmer for an hour or two, till the chicken pulls apart fairly easily. Take the pot off the heat, pour off the broth and set it aside. Pull the chicken apart in the pot using your hands or a pair of forks. Add a couple tablespoons of broth back to the chicken and mix it around. Return the pot to medium-low heat and add the barbeque sauce and bacon. Mix it well then let it sit for a minute. Repeat several times. Remove from heat and let it cool for a couple minutes. Serve hot.

I love pulled barbecue stuff, it is awesome. But it has a major drawback. That is that most of it, especially the really good stuff, takes a long time. Even the stuff you do in the oven instead of a smoker takes a long time. This recipe, on the other hand, only takes about an hour. You can take more time with it if you want, but you really don't need to. You actually want the chicken to dry out a bit when you braise it, that way it will soak up some of the barbecue sauce. So here we go, pulled barbecue chicken that is almost quick enough to be a weeknight meal.

First, brown up the bacon in a medium/large sauce pot. Now you don't have to put bacon in this, it's technically optional. But it's really good and I highly recommend it. I mean, cmon. Bacon. Especially if it's smoky it's good in this recipe. Anyway, brown the bacon. Remove it from the pan to a paper towel lined plate. Pour out most of the grease from the pan but leave enough to brown the chicken. Salt then brown the chicken. While the chicken is browning mix together the braising liquid. If you want you can make this stuff stronger (or weaker), spicy, smoky, whatever. The seasonings listed are a guideline only. Once the chicken is browned add the broth mixture.

Now let it simmer for an hour or so. Pull the pot off the heat and pour off the liquid, but keep it.

Shred the chicken either by hand (wear gloves for this, it's hot work) or with a pair of forks. I usually fork it.

Now the chicken should pull apart pretty easily, but if it doesn't don't fret too much. Just do the best you can, and if there are big chunks they will be breaking down a little more in the next stage.

Which is this, adding back a 2-3 tablespoons of the braising liquid and turning the heat on to medium-low. Stir the chicken around till it absorbs it then add the barbecue sauce and bacon.

Ok, I admit it. I use bottled sauce. I haven't found a homemade barbecue sauce recipe that I really like. But if anyone wants to share one that they think would be good, I like sweet, sticky ones. Like, oh... say, Bullseye. Just as an example. Now, you don't have to use a bottled sauce like I do. Use whatever kind you like best. You could even take some of the braising liquid, reduce it a bit, add some vinegar, maybe some mustard and have a Carolina style sauce. Just treat it like I do the bottled sauce. Which you should treat by stirring it occasionally, but not too much you want a little caramelization if you can get it, till it is partly absorbed into the chicken. This should take about 3-5 minutes. It will make the meat juicy and tender and break up some of the pieces chicken if you couldn't get them all by hand/fork.

And that's it. Serve it on a toasted bun, maybe with some pickles and cole slaw.

Hmm, looks good man. I got a fresh batch of pickles in this week. Remind your girl to remind me to give her some for you, especially if you have any of the chicken left over. Did you prefer the cucumbers or the onions? My layering fu was off, and one jar is mostly onion :)

Thanks. Sweet. I much prefer the cucumbers myself. I wish we had had some last night. Heh.

Your chicken looks great! Yeah and pickles would be great with it! lol

Hey Bob,
You've got a great blog here! Loving this recipe, totally drooling. I bet the bacon sends it over the top, in a great way!

Good Stuff, Bob! I would use Famous Daves Hot and Sweet Pickles.

Thanks Susan, Michele and Spryte. :)

Hi Jenny! Thanks, the bacon does nothing but good things to it.

Cathy W: I'm not familiar with those, but I would give them a shot. I mean hey, they sure sound good. Heh.