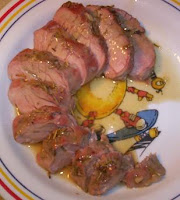 Cut the garlic into matchstick thick slivers. Trim pork as needed. With a paring knife make 20 or so holes up and down the tenderloin. Stuff each hole with a sliver of garlic. Rub the tenderloin with half the rosemary. Put it in a roasting pan with a rack in it. Pour the cider in the pan along with the rest of the rosemary and any leftover garlic. If there isn't any left over garlic, dice up a half a clove or so and add it in. Roast the pork at 450 for 10 minutes or so, till slightly browned, then turn the heat down to 350 and baste it with the cider. Baste it every 10 minutes or so till it is cooked. Remove it from the oven to a ceramic plate and tent it with foil, let it rest for 5-10 minutes or so. While the pork is resting remove any unwanted solid from the cider in the bottom of the pan. Reduce the cider for a minute or two and taste it. Give it a turn of pepper and a pinch of salt. If it needs more reduction or spices then take care of that now. If the flavor is how you want it add a cornstarch/water mixture and boil it for a minute, till thick. Slice the pork and serve it with the sauce.

Pork tenderloin is a wonderful thing and inexpensive to boot. It is easy to over cook it and have it be dry, but there are some tricks to keeping that from happening. Marinades help, especially if you can do it for several hours. Brining it is good too, but also takes some time. For this one we are going to baste it. I don't remember exactly when this recipe came to be, I think it was one time when me and a buddy of mine were trying to figure out what to do with a tenderloin he had. And he had cider. So we made this. Do you like the deep background story for this one? Make you care about the characters? Heh. Anyway, this recipe is really simple and just awesome. Using a paring knife to make the holes to stud the garlic in lets the cider really soak into the meat and keep it juicy. Not to mention infuse it with garlicky, appley goodness. Which is a good time.

So first cut some garlic into slivers. I used about 2 big cloves, but I like it fairly garlicky. Trim the pork, if it needs it. I find it doesn't often need much. Now take a paring knife and stab about twenty or so deep holes in the tenderloin.

Don't worry too much if a couple go all the way through, any garlic that falls out just goes in the sauce. Put a sliver of garlic in each hole.

If you don't have any leftover, dice up some more to put in the sauce. Now rub half the rosemary and a pinch of salt into the pork.

These measurements here aren't very exact, I'm afraid. My hands were all porky and I didn't get things measured up right. Sorry. Now put the pork on a roasting rack in a roasting pan or if you don't have a small roasting pan, use a jellyroll pan. I lined mine with foil, for ease of cleaning and pouring. Pour the two cups of cider into the pan along with the rest of the rosemary and garlic. Roast the pork at 450 for ten minutes or so, till it has just a little brown on it.

Now reduce the heat to 350 and start basting. You want to baste it every 5-10 minutes. This will make it take a little longer, but here's the thing about that. A pork tenderloin usually only takes a half hour or so. I cooked this tonight for almost an hour and a half. I was trying to get the sauce to do the glaze thing and it just wasn't working. I lost track of time and thought "crap, this is going to be dry as a bone". But when I cut into it it was tender and juicy. All the basting and the big holes running through it made it just soak up the cider. I wonder if maybe as it was drying out in the oven I was replacing it's liquid with the sauce... That would make sense, but I don't know if it actually happened. It would be cool though. Either way, the pork came out awesome.

Once the pork is done put it on a ceramic plate and tent it with foil to rest for a couple minutes. Pour the cider into a small sauce pan.

Pull out anything that the tenderloins may have dripped in that you don't want to be there. Add a twist of pepper, a pinch of salt and bring it just to a boil. Give it a taste and see if it needs anything. I sometimes add a clove or two to simmer in there with it, a little sweet onion or some shallots would be good. If the taste is how you want it to be but it is still too thin get a couple tablespoons of cold water and mix in a teaspoon or so of cornstarch. Add that to the sauce and bring it to a boil, stirring constantly. After a minute or two it should be plenty thick. Now slice the pork, put it on a plate and pour some sauce over it.

And there you go. That empty spot on the plate was going to have salad on it, but we ate it while the pork was cooking. You know, like courses. Very la-dee-da. There was too salad, look!

I do so eat greens. Now that I think of it, the sauce could make a good salad dressing base. Add some balsamic maybe, or cider vinegar to keep with the theme. UPDATE: Yes, it does make a good dressing base. I added some cider vinegar, more pepper and a little more salt and it was lovely. I'm sure you could add other spices, but I couldn't think of what to use. Any ideas?
Email ThisBlogThis!Share to TwitterShare to FacebookShare to Pinterest
Posted by Bob Labels: main dish, pork at 9/17/2008 09:09:00 PM

That looks awesome!! I can't to try it! (and I LOVE the SpaghettiOs bowl!!)

Heh, it's the closest thing to fine china that I have. :D

You'll find a spaghettiOs bowl in one of my pics too!

Awesome! We should start a club. Heh.

That looks great, Bob! I love the step by step pictures!