Boil as many potatoes as you want till fork tender. Generously oil a cookie sheet with olive oil. Put the potatoes on it and smash them down a bit with a potato masher or the bottom of a glass. If you use a glass fluff them a bit with a fork, if you use a masher press them once then turn the masher 90 degrees then press down again. Sprinkle the potatoes with salt and pepper, don't be shy potatoes need lots of salt. Mix together the butter and garlic. Place a half tsp or so (more if you want) on each potato. Bake on the top rack at 450 till golden brown, 20-25 minutes.

Ok, this is yet another one from Pioneer Woman. She originally got the recipe from a reader in Australia. Go on over there to get the whole story if you are interested (and, frankly, better pictures. She takes really good pics.), it's not my tale to tell. I had suggested it to a buddy of mine over at BakeSpace but realized I hadn't made it for myself yet. Wait, what? I haven't mentioned BakeSpace? Surely you jest. I must have, Bakespace rules. It's a site with tons and tons of really friendly, helpful, knowledgeable people who are just dying to talk about food with you. Not to mention the mountain of recipes. And it's free. So why not pop on over? I won't be jealous, I promise. Just come back, you do want to learn how to make these potatoes. They are mad good. Ok, so here we go. Crash Hot Potatoes.

Start by taking some small potatoes, I'm using baby reds, and boiling them till they are fork tender. 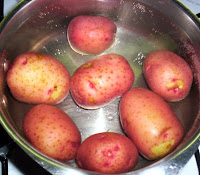 Fork tender, just so you know, means that you stick a fork in them and they slide off. Basically thoroughly cooked, but not falling apart is the goal. I'm making seven. Then put them on a baking sheet of some type. I used a jellyroll pan lined with foil, because I don't want to wash dishes any more than necessary. Put a goodly bit of olive oil on it, it is the difference between the potatoes sticking and not.

You could probably use some kind of spray, but olive oil is the healthy kind of fat, so why mess around?

Now you want to smash them down a bit, 3/4 of an inch thick or so. I used a pint glass. If you want good, detailed instructions on how to do it with a potato masher, that's how Ree did it (that's Pioneer Woman. I've linked to her three times, I figure I can use her screen name now. Heh.), so you can check it out there.

I used a glass, then fluffed them a bit with a fork to give them crags for browning. I sprinkled them with a good amount of salt and pepper. Then I took about a tablespoon and a half of soft butter and mixed it up with a big clove of minced garlic. I dolloped about a half a teaspoon or so on each potato and tossed them on the top rack of a 450 degree oven.

About 25 minutes later I pulled them out.

Nicely browned, a couple blackened skin bits and the butter had soaked into the potatoes leaving behind little chunks of roasted garlic. I found the blackened bits added some really good flavor, not nasty bitterness. Then I served them with some bbq steak tips.

They were wicked good. Now here is a great thing about these, you can season them however you want. Don't want butter and garlic? Use more olive oil (they do need some kind of fat on top, for browning) and some rosemary. Or sage, or tarragon, paprika, cayenne, oregano, whatever. It's potatoes. Match the seasoning to the dish and you are good to go. Of course, garlic goes good with pretty much everything. Mmmm, garlic.
Email ThisBlogThis!Share to TwitterShare to FacebookShare to Pinterest
Posted by Bob Labels: potato, side dish, vegetarian at 9/03/2008 09:30:00 PM

Cool blog - it's Babette from BakeSpace. Hi! Thanks for posting about our site. We really appreciate it.

Thanks Babette! :) No sweat, I've had a good time there.

Those potatoes are Slammin'!!!! I can't wait to make them. I picture them with some bacon and chives...nelly said she'd add some cheese next time, so maybe it will be cheddar, bacon and chives like a crispy loaded baked potato!

I have made these several times, and the ass they kick is epic. Do you get good bottom browning with the foil? I find when I use my heavy half sheet pan and brush it with olive oil I can pop them off with a thin metal spatula and get really nice crispy undersides.

Hm, we did BLTs last night with K.'s one tomato, and I have some bacon still. I have some sour cream. I have a a couple of pounds of small red potatoes. Maybe I will pick up some nice steaks on the way home today...

Oh yeah, the bottom still browned on foil. Nice. When you put bacon on them are you going to top them with raw chopped bacon or cooked? I was thinking raw would be best, then they would cook on the potatoes and the fat would soak into them.

Good question. I had planned on crisping and crumbling the bacon, but now I am not sure...

Why not do a couple each way and see which comes out best? I was thinking crisped, crumbled bacon would just blacken after 20 minutes in such a hot oven.

I was planning to add them afterward, along with the sour cream. I bet the drippings would do a fine job at promoting browning though...

Yeah, I bet they would. And they would add more bacony flavor. :) Course, you could always mix the bacon and some chives in with the sour cream to make a sauce.

I love these potatoes, and am excited that Brutal plans to make them for me with bacon. Yay, bacon!

I can't wait to try this recipe. It sounds yummy, fun and easy. I'll post about it and link back from Nibbles of Tidbits.
Thanks, Shelly B.

Shelly: awesome, thanks! I would love to know how you make out with them! :D

These potatoes are fantastic! I made them last night seasoned with olive oil, pepper, fleur de sel and fresh thyme. Hit the spot with some steaks!

I just made these for the first time...they are even better than I expected, and I had some seriously high expectations!! Mmmmmmm....