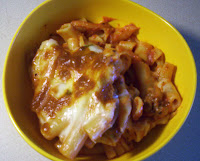 Preheat the oven to 475. Brown the onion in a couple tsps of olive oil in a large, oven safe pot. Add the garlic and cook till fragrant. Add the tomatoes and seasonings and give it a good stir. Add the water and pasta and stir again. Bring just to a boil then reduce heat, cover and simmer, stirring frequently, till ziti is cooked al-dente. Check the seasoning and add salt, pepper or anything it needs. Cover with cheese and bake till the cheese is brown and crispy, 10-12 minutes.

This is an adaptation of the baked ziti recipe from Americas Test Kitchen. I'm just going by what I remember, I didn't write it down when I watched it, so we'll assume any flaws are mine and not ATKs. The reason I liked this particular recipe so much is because it's a one pot deal. Less dishes = good times. Plus it's covered in mozzarella and I love that stuff. Most baked ziti recipes I've seen say "boil your ziti, put it in a casserole dish with a bunch of sauce, cover it with cheese and bake it". This recipe cuts out a couple steps by combining the pasta cooking with the sauce making. It's like hamburger helper for adults. And without hamburger. Unless you put some in. Which you can. I'm actually adding Italian sausages. The recipe above is just the basics (although it is perfectly good as it and vegetarian to boot) you can mix in all kinds of things. Zucchini, bacon, meatballs, peppers, mushrooms, shrimp, various cheeses, whatever you want. But why don't we just make it, then you can see for yourself.

So, first off if you are using meat or mushrooms or anything that you want to brown, do it first. Like I said, I'm using sausage.

Use a really big oven safe pot, you are going to want it to be able to hold a pound of pasta and seven cups of liquid. Once they're browned I'm moving them to a paper towel lined plate since I don't want the sauce to taste like nothing but sausage. Leave a little grease in the bottom of the pan to brown the onion and garlic in. And then brown the onion in it.

If you aren't using something that puts out it's own fat just use a couple teaspoons of olive oil or butter. Add the garlic when the onion is just about done and saute it a little bit. If you browned up something like sausage add it back in now.

Then pour in the sauce, add the basil and oregano (uhm, I didn't measure them. Sorry. Just add them to taste.) and stir it up. Then the water

and pasta and stir it again.

Did you notice me pouring the water from the can? Guess how many ounces are in 3 1/2 cups? 28! Very convenient. Don't ask how long it took me to figure that one out. Now bring it to a boil, stirring frequently. Then reduce the heat to low and cover and simmer till the pasta is cooked, still stirring frequently so the pasta doesn't stick. This should take just about as much time as it would in water, maybe a little longer. Once it's done turn off the heat and take off the cover.

Now you can mix in some parmesan, romano, and/or some milk or cream to make it really rich. Some fresh herbs would be nice too. Now top it with the mozzarella, how much depends on your tastes.

I recommend lots. I would have put even more on, but this was all I had. Now toss it in your preheated 475 degree oven till the cheese is browned, maybe 10-15 minutes.

That's it kids. Want to know what else about this recipe is wicked cool? You can make it in about a half an hour. Make it, eat it.
Email ThisBlogThis!Share to TwitterShare to FacebookShare to Pinterest
Posted by Bob Labels: cheese, italian-esque, main dish, one pot meal, pasta, vegetarian at 9/10/2008 01:43:00 PM

I love when the cheese gets all brown and bubbly. Great shot! I'm going to add a link to your page on my blog!

i love baked ziti- i never realized it was such a quick dish! I always assumed it was another slow-cooked italian favorite.

The baked ziti sure looks good. I could omit the sausage and try it out I guess.

I love your profile comments. Very down to earth and funny. Ziti looks yummy. I think if I try it, I may put in mushrooms and tofu. Hee hee. Have fun blogging!

Lauren: Neither did I! I was psyched when I saw that it could be done so fast.

divya: If you wanted to make it almost healthy you could even add vegetables. :)

yum!!!!! But remind me to give you my favorite baked ziti recipe...sour cream, provolone, mozzarella...

I really enjoy the way you write - and I'm sure I'd like the way you cook. Looking forward to seeing more of your cats as well!

Thanks Timeless Gourmet! If you want to see more cats, you can click on the picture of them in the sidebar. It's a link to their blog. :)

This looks so tasty, I love cheesy, gooey food! I make a really killer lasagna, but I'm definitely going to try out this recipe!

Mercina: Thanks! Let me know how it turns out for you. :)

I am a newbie here, (actually my first time subscribing to a blog!) I have been reading up and I love your style and cant wait to try some of your recipes. I love that you add pics. Wicked cool! (yeah, I am from RI, but lived in MA for a few!) I will be trying this one this weekend, probably adding some pepperoni. Thanks for sharing your thoughts and ideas!
MaryAnn

MaryAnn: Thanks for subscribing and for the compliments! :) What part of RI are you from? I lived in Providence for some years, near Thayer St for a while and near Downtown too. Let me know how the ziti turns out, I bet pepperoni would be great in it.

this was GREAT! I cut up, quartered and sauteed a pepperoni stick (in a seperate pan as they are SO greasy) added that to the sauce with the pasta to simmer and I added sliced provolone under the mozzarella for the oven... yummmmy!
We live in the Knightsville section of Cranston. bout 5 minutes from Prov... of course, it is RI, is anything farther away than 5 minutes??!! lol