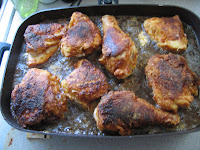 Place chicken pieces into a plastic container and cover with buttermilk. Cover and refrigerate for 12-24 hours. Melt enough shortening (over low heat) to come just 1/8 of an inch up the side of a 12 inch cast iron or heavy fry pan. Once the shortening liquefies raise heat to 325. Do not allow oil to go over 325. Drain chicken in a colander. Combine salt, paprika, garlic powder and cayenne. Liberally season chicken with the mixture. Dredge the chicken in flour and shake off the excess. Place the chicken skin side down into the pan. Put thighs in the center and breasts and legs around the edge. Cook chicken until golden brown, approx 10-12 minutes on each side. Internal temp should be ~180. Be careful to monitor the shortening temp while cooking. Drain the chicken on a rack over a pan lined with paper towels.

So today me and my girlfriend went to my brothers for lunch. He made fried chicken. Fried chicken frigging rules. His recipe is awesome, even if he doesn't put sage in the rub. :P Heh. So I figured I would take some pics and blog the deliciousness. The pictures aren't that great since I was using my sister in laws camera and I'm not used to it (it's fancier than mine...). But I think they still get the point across. The first thing you do is soak the chicken in buttermilk. 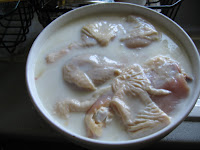 This helps all the stuff cling to it and form a nice crust. You want to let it soak for at least twelve hours, this time my brother did it for about sixteen. Please, refrigerate the chicken while it's soaking. It's really for the best. Now you want to melt the shortening in a warm pan, then once it's melted turn up the heat to 325. The recipe above calls for a cast iron or heavy frying pan, but my brother has one of these electric fryer/griddle kind of dealies. 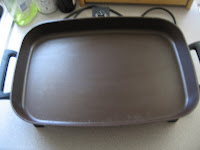 They are great because you set the heat and don't need to monitor the temperature while you are cooking. Otherwise you need to check the temp every couple minutes to make sure it doesn't go above 325, if it does things will burn. While the shortening is coming to temp drain the chicken and place it on a rack. Mix together the salt, paprika, garlic powder and cayenne and sprinkle it generously on the chicken. 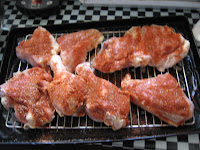 I like adding a little sage to it too, but this is my brothers recipe and this is how he makes it. Don't misunderstand, it is really, really good. This recipe doesn't need any changes. But if you wanted to add some sage, that is good too. Heh. Don't be shy with the seasonings, this is supposed to be a flavorful dish. Once both sides are covered with seasonings dredge them in flour then shake off the excess. 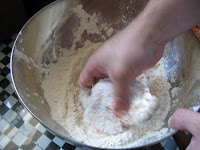 When the shortening is up to temp place the chicken (carefully!) in it. 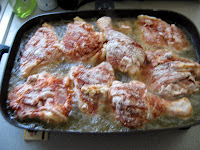 A splash guard is a good thing here... 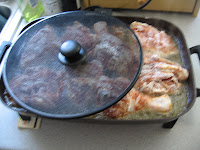 even if it doesn't quite cover the whole pan. After 10-12 minutes, when the chicken is golden brown or even dark brown, flip it. 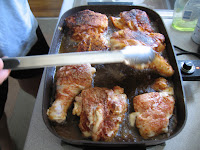 Let it cook for another 10-12 minutes or until it has reached an internal temperature of 180 degrees. Once it's done take it out and put it on a rack over a pan covered in paper towels. 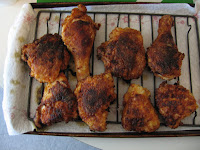 Let it sit for a minute or two to drain off the excess grease and cool a bit. Then eat it. We had it with mashed potatoes, buttermilk biscuits (I will post that recipe later) and corn on the cob. 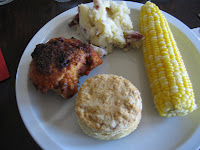 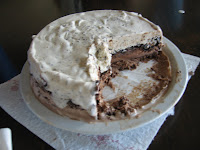 Guh. So good. My brother made the cake by taking some homemade brownie bits, turning them into crumbs and toasting them with a little butter (to keep them together, of course). Then he used that as a crust layer in a spring form pan with a circle of parchment paper in the bottom. Then he put softened chocolate ice cream on top of it, then a layer of brownie chunks and hot fudge. Then another layer of ice cream, this time vanilla with jimmies in it. Then he put it back in the freezer till dessert time. Wicked good.
Email ThisBlogThis!Share to TwitterShare to FacebookShare to Pinterest
Posted by Bob Labels: chicken, comfort food, main dish, recommended side at 8/31/2008 06:50:00 PM

I so love that chicken. I brought the last two pieces for lunch today :)

Nice. After being fried can the bones still be used for stock?

Sure! There are not that many though since when I break down a chicken for frying all I leave on the bone is the drumsticks and thighs. I don't usually bother saving them either -- the carcass from the rest of it provides plenty of stock materials, and collecting and adding the other bones would be a pain. Also, the seasoning is pretty powerful and I don't know that I would generally want that in my stock. I like to keep the stock lightly flavored since it is an ingredient more than anything else.

Hmm, yeah. The seasonings would be a bit much. Oh well, just curious. Heh.