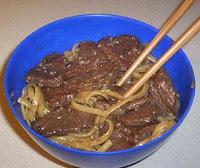 Mix together soy sauce, honey, water and corn starch. Set that aside. Trim beef and slice thin, against the grain. Stir fry over high heat till browned. Remove from heat to a ceramic plate. Lower heat to medium, add garlic and saute till aromatic. Deglaze pan with sauce. Bring sauce to a boil, reduce heat to low and simmer for a minute to thicken. Add beef, sesame seeds and any juices, simmer till tender. Serve over pasta or rice.

So I don't know if I have mentioned this before, but all the Chinese restaurants around my neighborhood suck. I mean, they all make a fine scallion pancake and a decent beef teriyaki, but if you want a main dish? Forget it. Soggy and bland. Everything is deep fried (not always bad, but still...) and sits in the sauces way too long. And I use "sauces" figuratively. It's all one sauce, mostly corn syrup, that has different things tossed in. Want General Gau? Generic sauce with hot peppers. Sesame beef? Generic sauce with sesame seeds, and never enough sesame. Chicken with cashews? (shudder) Lets not even talk about that. Kung Pao? Well that's nothing but soy sauce and hot peppers. So ok, two sauces if you count straight up soy sauce. You get like three flavors, two textures (over done and squishy) and that's it. Most disappointing. That's one of the reasons I started cooking my own asian style food. That and I just like making stuff. Heh. Anyway, sesame beef (or chicken) is also one of my girlfriends favorite things, so I've been trying to find a good recipe for it. All the ones I have found have been either far too minimalist or way too fancy-pants. So I took a piece here and an ingredient there and came up with this. This is the first time I have made it, but it came out pretty good. Strong sesame flavor (thanks to at least twice as much sesame seeds as any other recipe called for), not too sweet or too soy-y. I served it with noodles, but you could do it with rice or steamed vegetables too. I think broccoli, peppers, baby corn and snow peas would be good. Shall we do this then?

First things first, toast your sesame seeds, if they aren't toasted already. I just tossed mine into a dry stir fry pan, heated over a medium heat for a while, stirring frequently.

You could also toss them in a toaster oven or regular oven, just keep an eye on them so they don't burn. Now mince up your garlic and ginger.

Looks kinda lonely there doesn't it? That's ok, it will have plenty of company soon. I try to use fresh for both whenever possible, it really gives the best flavor. I wound up having maybe a half a teaspoon of garlic from the small clove I used, but you can use more if you want. Garlic is good. You want to be careful with the ginger though, it can overpower really easily. But nothing is as nice as fresh ginger in this kind of dish. (drool) Sorry... Now mix up the sauce: soy sauce, honey, water and a little pepper.

The cornstarch will go into it right before you put it in the pan, if you put it in now it will just settle to the bottom and be harder to incorporate later. Now the beef. You can use any kind you like, but you want it to be something that doesn't need to cook for too long to get tender. I would use flank steak normally, but what I had was steak tips. So that's what I used.

Turned out really well, actually. Very tender and flavorful. Slice it short and thinnish, 1/4-1/2 an inch thick, 2 or so inches long. Heat up an oiled wok or fry pan on high heat. I'm using canola oil since I don't want any competing flavors. I cooked the beef in shifts so I would get good browning and some fond.

What I found though was it took more shifts than I thought it would and by the end the fond was getting perilously close to burned.

Burned fond is bad, it makes a sauce bitter. So what I did was on the last shift I really crowded the pan. This made the meat release all kinds of juices and pretty much deglazed the pan.

The fond didn't burn and the rich beef flavor was preserved. Pretty clever, huh? Heh. Remove the meat. You should be putting it on a ceramic plate to keep the juices, they are good stuff and should go into the sauce when you add the meat back in. Now toss in your garlic and ginger and saute them till aromatic.

It should only take thirty seconds or so, you don't want to burn it. While it's doing that toss the cornstarch into the sauce and mix it in really well. Toss that in and stir it till it is glossy and thick.

That should happen really fast. Now reduce the heat to medium-low or low and add the beef back in. Stir it to coat,

then toss in the sesame seeds.

Stir it some more then let it simmer for a minute or two.

Now hopefully whatever you are serving it over is ready. I had about a half pound of pasta. I decided to just toss it in with the beef and stir it around to coat.

Sprinkle it with the sesame oil (more if you like a really strong sesame flavor) and that's it. Sesame beef. Enjoy.