Back on the Net

In the past week I have moved and thus been without internet. This is not something I enjoyed. But now that I have it back, I can tell you guys all about my exciting new kitchen. Take a look. 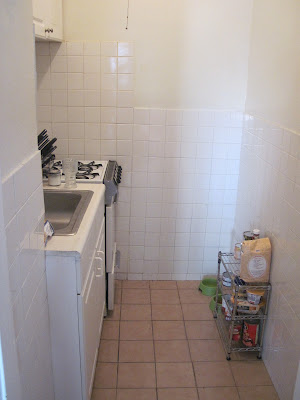 Go ahead, take another. It is a bit much to take in all at once and I'm sure you have some questions.

Like, is that the whole thing? And yes, yes it is.

But where're the counters? Ha! No. Stinking. Counters. There is enough space between the sink and stove to put my knife block. I'll probably wind up moving it too since I doubt I'll be doing much prep in there.

Doesn't it get hot in there? Why yes it does. In fact, it gets downright hellish. Plus if I don't have a fan blowing into it the heat sets off my smoke detector. Excitement!

At least the sink looks big, right? It sure is! In fact I can fit my whole large roasting pan in it. Can't fit the pan in the oven though.

So I figure if Kevin over at Closet Cooking can whip up the fancy pants stuff he does in a closet sized kitchen, I should be able to whip up my homestylely stuff in one that is actually smaller than some closets I've had. I guess we'll find out.

My other trouble is I don't really like cooking for just me, it's just not as rewarding. But I have no money, so I've got to work something out. So we're going to see how many ways I can cook rice and beans, pasta, ramen and... well, that's pretty much it. Heh. There will also be more vegetarian stuff since that's cheaper.

On the plus side there's lots of light in this place, that should help my picture quality. Well, except in the kitchen which has no windows, so there won't be many prep shots anymore.

I've babbled on enough, I actually think I might start up a pot of rice and beans...
Email ThisBlogThis!Share to TwitterShare to FacebookShare to Pinterest
Posted by Bob Labels: random stuff at 7/08/2011 02:14:00 PM

Well... all that white tile should be kinda reflecty for pics though, right?

It looks small, but the fact that it's white makes it look bigger. ;) Glad your back though, small kitchen and all.

I like your little kitchen! It is bright and looks cheerful. Maybe you could fashion some kind of board to place over the sink to use for a prep area? I do understand about cooking for one and it not being as rewarding. Also about bugetary restraints--I have those as I am sure many people do. We eat a lot of vegetarian food. Eggs are also very budget friendly and omelets are easy to make for one. I look forward to hearing about how you creatively make use of your new space. And you have a kitchen of your own!

I don’t know how should I give you thanks! I am totally stunned by your article. You saved my time. Thanks a million for sharing this article.