A while back Goldie from Confessions of a Serial Baker asked me what I thought of the concept of tiramisu brownies. I thought it was a fantastic idea. I mean, really, what's not to like? So she made something, which you should go check out, and I made these. 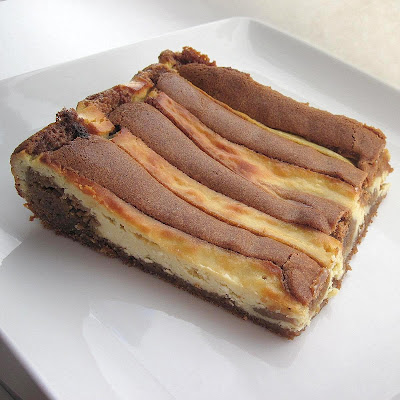 I decided to do blondies, since I'd been craving them, and a cream cheese filling like the one from the strawberry cream cheese brownies I made a while ago. 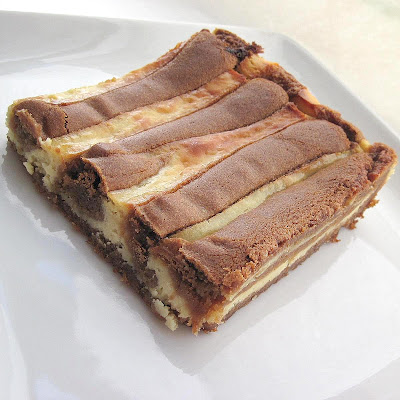 I used this recipe for the blondies and for the filling I just added some rum and some very strong brewed coffee (a couple tbls each) to the same one I used for the above mentioned brownies. I put 2/3 of the batter into a parchment lined 8x8, then the filling on that, then I piped fingers of batter over the top. The goal was to have it look vaguely like ladyfingers, but as you can see it didn't quite work. 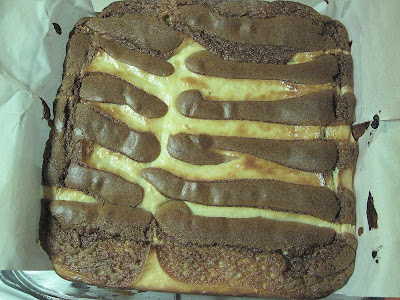 I still think it's a cool effect though. Anyway, I didn't get any step by steps, but they were really good. Next time I make it I'm going to use a light brown sugar blondie instead of dark brown or maybe a cookie bar kind of thing. I think a lighter flavor base would be better, the admittedly delicious blondies were a bit distracting. The filling was wicked good though, you could really taste the rum and coffee. 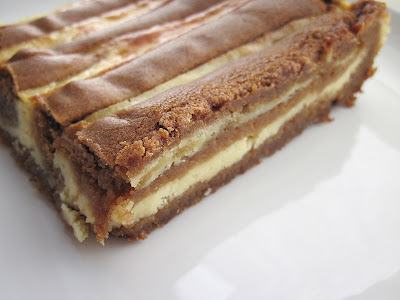 All in all these were a good time, I'm glad Goldie challenged me to make them. And they freeze well, too. Which is good since my girlfriend thought they were too boozy. Heh.
Email ThisBlogThis!Share to TwitterShare to FacebookShare to Pinterest
Posted by Bob Labels: baked goods, bars, booze, cheese at 12/21/2009 09:00:00 AM

Talk about the creativity! A large slice of Blondies with a double espresso would make this snowy afternoon better!

What a cool idea. I so like that last picture. Might get inspired myself, sometime after holidays.

It's my first time coming across this interesting recipe. I love the sound of it already. they look great! such yummy treats. You've a great blog :)

Ooh, you were very creative with your cream cheese filling! Nice job, Bob!

I want to try this again, with some variations and try to incorporate mascarpone cheese into them somehow.

This was a fun challenge--we should do this again in the future!

That's really a cool idea! I wish I could taste them!

Too boozy? No comprendo!! These look really awesome...and I totally wish I could taste them, too!

Wow, tiramisu blondies! I love the idea and they sound absolutely fabulous!

seriously, what a terrific recipe you invented... next time i plan an italian meal... These are on the menu!

Tiramisu is one of my absolute favorite desserts but it is SUCh a pain to prepare. These seem like they would be a quick fix to any craving I had. So impressed that you just came up with the recipe from scratch.

Great flavors in this!

This is brilliant!! I might have to steal your idea here, Bob. I've actually been thinking about tiramisu recently and I'm OFTEN thinking about blondies. Nice!

Nice!! Combining two tasty treats. blindies and my favorite dessert tiramisu. Love it to the nth degree!!!! I really do.

Angie: Is there an afternoon that that couldn't make better? ;)

Dajana: Thanks, I'd love to see what you do with the idea!

tracieMoo: Thanks! Heh, as far as I know I created this specific thing, although the idea was Goldies. ;)

Goldie: Thanks! Not sure how to work marscapone in, but I don't have a lot of experience with it.

Michele: I'd fax you some, but they're long gone. Heh.

girlichef: Doesn't make much sense to me either... :D

Year on the Grill: I know, right? Well thanks, you have to let me know how they turn out.

Joanne: Heh, thanks. They are much easier than real tiramisu.

Hungry Dog: No need to steal, just let me know how it goes for you!

First off.... this is sinful. It is creative and I could see this working well but would have never thought of it.

Second, thanks for the introduction to Confessions of a Serial Baker!

Finally... thank god this isn't a rorschach test as I don't know how I would reply! ;-)

mmmmm Boozy... Sounds pretty good to me... I mean, I love Blondies, and I love Tiramisu... So hey what's not to love about both of them together.

Too boozy? Is there such a thing?
What an amazing idea, I love tiramisu. Very creative.

Very creative. It combines a million flavors most people like anyways.

These look good! I really like the flavors. Boozy is good! Especially for the holidays!

too boozy? is there such a thing? LOL. they look sooo good!!

My goodness, this is a must get recipe! Looks awesome delicious. Thanks for sharing, Bob! Btw, in case I forgot, wishing you Merry Christmas & Happy New Year. Hope you have a fabulous time with your family & friends. Have lots of fun & on the top... may your wishes come true! Is that good enough? hehe... Cheers.

Those are totally sick! Man, I wish I could eat those.

I want to wish you, your girlfriend, the Real Bob, and Noodles a very happy holiday! All the best to you in 2010.

Wow this is such a wicked idea! Definitely on my list now!