I've been slacking on the recipes here, haven't I? Well, I promise to bust something out this week, although what it will be is still hidden in the mists. But in the meantime, here is some steak and bread. 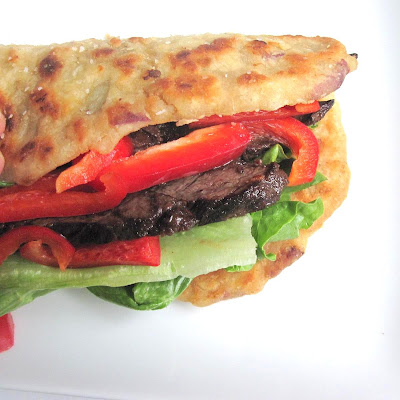 The steak is a skirt steak that I just marinated in some POM/tangerine, garlic, crystallized ginger, honey and soy sauce. The flatbread is the recipe I've posted before only I used red potato, with the skins chopped up in there to add some earthy flavor, and some caramelized onion. I put some lettuce and red pepper on it, it didn't need a sauce since the steak had plenty of flavor and moisture. Skirt steak is like flank steak, only fattier. 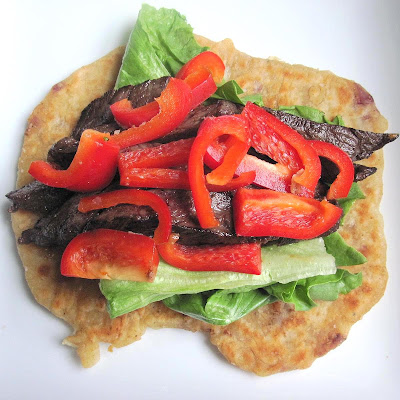 It was really, really good. I still have some of the dough for the bread in the fridge, I wonder how long it stays good for. Also, when I made the flatbread I brushed the butter onto the skillet instead of the bread. It browned the butter a bit, made the bread a little darker and gave it a bit of a crisp. It's good times, I'm definitely doing it that way from now on. So who else out there makes their own flatbread? How do you do it?
Email ThisBlogThis!Share to TwitterShare to FacebookShare to Pinterest
Posted by Bob Labels: beef, bread at 12/28/2009 10:45:00 AM

I can't find skirt steak here. I need to ask at the butcher store if they do that cut or if they use it for a different purpose.

I love your flatbread sandwiches! This one looks great, though I might have to add some blue cheese. Happy, happy new year to you!

I need to make me some flatbread and get a nice skirt steak. This looks like a perfect new year's meal.

I've never made my own flat bread but now I sure want to! This looks awesome, and since it's lunchtime, it looks extra awesome. Your photos are great, nice natural light!

Happy New Year to you! Sorry I haven't been around as much lately - I'm kind of taking a bit of a blog break. Hopefully, I'll regain some of my energy soon. In the meantime, take care and all the best for 2010!

tamilyn: Thanks! I had a hard time finding it here until just recently.

unconfidentialcook: Cheese would be good, of course. ;)

Angie, Year on the Grill: Thanks!

Jenn: Heh, I still have a chunk of the steak in my freezer, I was thinking of having it NYE. Weird.

Hungry Dog: Thanks! It's really easy, I definitely recommend it.

Wandering Coyote: Thanks and a happy New Year to you. Hope you get your energy back soon, too! :)

Looks like a great sandwich! I've never made flatbread!

Looks awesome! We just had tacos using skirt steak...my favorite way!! If I had any left, I may have had to make a sandwich :)

HA! My verification word is amiga. Why do I find that worth sharing?

I love flat bread! Looks yummy! I haven't found a recipe I'm truly happy with yet.

I always prefer skirt steak for any kind of grilling meat. It's full of flavor, and can take up just about any kind of marinate. Yours look delicious Bob!

I love to sink my teeth in them, it looks delish. Happy Holidays!

MMMMMM Sounds pretty darn tasty to me! Can;t say I have ever really made my own Flat bread, Unless Foccacia counts. Been wanting to make "Fry Bread", but never seem to get around too it.

I have never made my own flatbread but now I am definitely going to. Yours looks fantastic!

I love this combination for a sandwich. Your marinade sounds delicious.

im starving and this looks so good my mouth is watering. I love the flatbread!

that looks darn yummy and requires no recipe to get me excited about cooking!

Your pictures and descriptions alone inspire me, I love this sandwich, sounds right up my alley.. and my husbands. He'd devour it!

Yum, I'll take one of those and a couple of Canadians, please.
I make chapatti flatbread, in a cast iron pan and brush melted butter on it after. It's all good!

Your skirt steak with potato and caramelized onion look so good. I love the flavor of skirt steak-It is actually one of my favorite cuts of beef.
This would be a perfect meal to serve up during the week. Love it.

Happy New Year to you!

I haven't had a flat bread sandwich in a LONG time. Going to have to change that after reading your post.

You know, I almost forgot you're a guy! hehe... You could actually made such a yummy meal. Your girl is just so lucky to have you... hehe... (or you're just so lucky becoz there's someone willing to eat your food!) hahaha... just kidding! Btw, HAPPY NEW YEAR to you & your love ones! May you've a blessful & prosperous new year. cheers!