Ok, last camera cleanup, I promise. I have something really good coming up on Monday and a giveaway to boot! So make sure to tune in then. 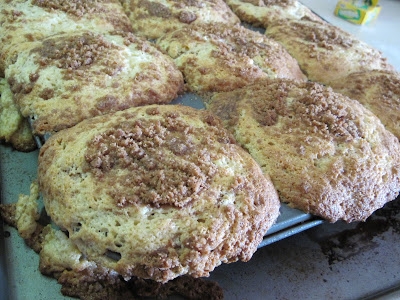 See that? That's what happens when you realize the muffins have been in there for five minutes at the drastically wrong temperature so you turn it up to where it's supposed to be and hope for the best. They came out perfectly edible, but the texture was... odd. 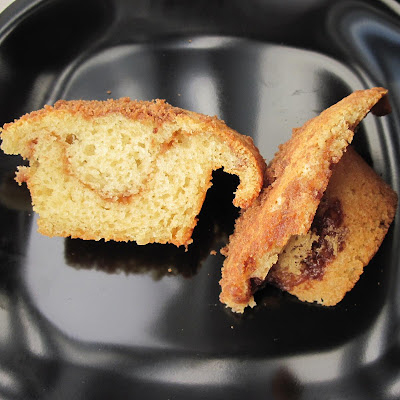 It was more like those Drakes coffee cake things than anything else. Not quite what I was going for. They came out much better the first time.

Here we have some french toast made with french bread. 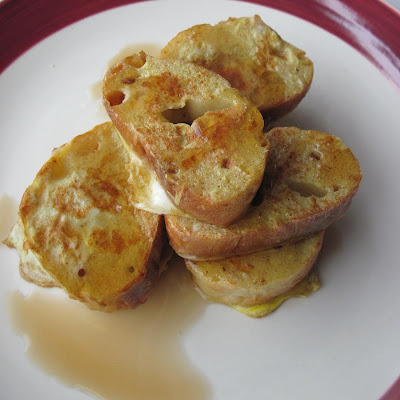 Awesome. It's the only time my girlfriend can eat 6-7 pieces of french toast. Heh.

This was a sandwich I made, it was roast beef that I wrapped in a foil packet with some fresh basil and oregano and heated up a bit, just so it released some juice. 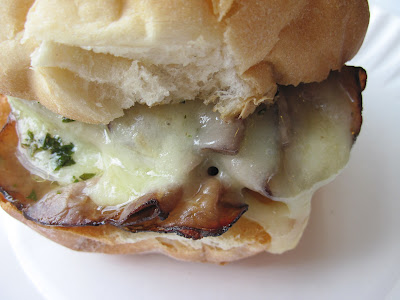 Then I smothered it with cheese, poured the juice back on and ate it. Good times.

And finally I leave you with a failed western omelet. 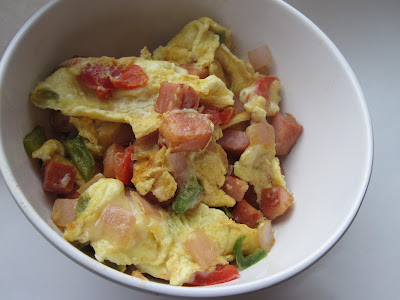 It was really good, but it wasn't an omelet.
Email ThisBlogThis!Share to TwitterShare to FacebookShare to Pinterest
Posted by Bob Labels: random stuff at 12/11/2009 10:55:00 AM

Man, that roast beef sandwich looks great! As does the French toast! Have you moved yet?

I love roast beef sandwich!
The texture of the muffin looks like the batter was over-stirred. Did you use muffin-method or creaming method to make the muffins?

The omelet looks good to me! Just change the name of it to a Western Scramble! :)

I want that roast beef sandwich. And the french toast. Sorry about the muffins...oh, I've done that too, only usually I put the temperature too high by mistake. not good.

Everything looks good to me, but especially that r.b. sandwich. I love anything swimming in cheese!

Wandering Coyote: Thanks! Yep, we're all moved in, if not quite settled. Since we moved into a smaller place there is some Tetris being played with some of our stuff.

Angie: Hm, I don't remember exactly. But I know I made them how the recipe told me to and they had always turned out well before. I'm pretty sure it was heat.

Dawn: They were tasty, if weird looking. Heh.

Hungry Dog: Too high would be much worse! ;)

unconfidentialcook: Me too. Mmm, cheese.

But the full-sized stove/oven will be worth it for sure!!

Bummer about the muffins! I bet their yummy! Everything looks good! Especially the sandwich.

I want that french toast and roast beef sandwich!!!

I love your camera clean-ups! LOL about the temperature mistake--mine usually take the form of using the temperature as printed in the recipe (F) and not converting it to C. YIKES! Call the fire department!

By now you're probably partly unpacked. Good! I hate moving, but I love it when it's all finished.

Hi Bob, glad that you're ready for more bakings again. Never mind about the muffin. You can always try another batch. Btw, those toast look great. Glad that I'm back again. Hopefully still be able to catch up. Have a wonderful weekend. Cheers.

I could totally see myself doing something like that with the muffins. At least they were still edible and Drake's coffee cake isn't SO bad...just not muffiny per say.

My omelets never come out looking like omelets. I usually try to flip and then realize it's going to be one use failure. So I just turn it into a scramble. Still tastes good!

Actually, Bob, the muffins look unique. I mean, the whole thing with cooking is that it is an art - you may have just started a new trend of sculpting food through baking.

No, I'm not being sarcastic. I really like that.