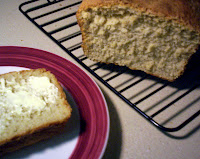 Mix boiling water and oatmeal. Cover and let stand till just warm. Mix the yeast, sugar and the 1/4 cup of lukewarm water. Add melted butter to yeast mixture and combine well with the oatmeal. Mix in 1/2 a cup of flour, cover and let sit for an hour. Add the remaining flour and the salt. Mix it well then turn it out onto a floured surface. Knead for 5 minutes or so. Put the dough in a greased bowl, cover and let rise for another hour or so, till doubled. Form it into a loaf, put it in a greased or parchment lined loaf pan and let it rise for another hour, or till doubled. Bake it at 425 for 40-50 minutes.

Well, fall is here. And colder weather means more baking. I had today off from work so I decided to bake some bread. I wanted to make an oat bread of some stripe since I have a big thing of oats. I found this recipe (which I have halved here) on this site, along with several other ones. It came out well, although there aren't any oat pieces left to speak of. I was hoping for something with little grain bits. The flavor is good though and the texture is slightly chewy but nice and soft. It makes a really good piece of toast, too.

First off, boil some water. Put the oats in a heatproof bowl and pour one cup of boiling water onto them.

If you spill some water, you shouldn't sweat it. I didn't, anyway. Cover the bowl (I used aluminum foil) and let it sit till it's lukewarm. This took about 15 minutes for me. Take a large bowl and put the sugar, yeast and 1/4 cup of warm water in. Mix them up.

Pour in the butter and mix a bit more.

Add the oat mix into the yeast mix and mix them together.

Lots of mixing in this one. You could probably use a stand mixer, but I wouldn't know how to go about doing that.

Anyway, cover the soon-to-be sponge and let it sit for an hour. It should double in volume in that time.

Now add the remaining flour and the salt and mix it around a bit.

Turn it out onto a clean, floured surface and start kneading. Mine looked like this when I turned it out.

Five minutes of kneading later it looked this.

Drop it into a large greased (I just used a little vegetable oil) bowl,

cover it and let it rise for another hour.

Once it's doubled pull it out and put it in a parchment lined loaf pan.

You could grease it instead, but I really love my parchment. Cover and let it rise again, till doubled.

Last rise though, I promise. Once it's doubled toss it in a 425 degree oven for 40-50 minutes. It only took me 40 minutes or so, but ovens vary. When it is browned, done and wonderful looking take it out.

Then I suggest cutting off a nice thick piece, hot from the oven and slather it with some butter. Then eat it.
Email ThisBlogThis!Share to TwitterShare to FacebookShare to Pinterest
Posted by Bob Labels: baked goods, bread at 10/06/2008 08:22:00 PM

That looks good, and it is easier than mine. Have you ever made this one?

The night before you plan on making the bread, stir together the water and Irish (steel-cut) oats, and refrigerate.

Next day, simmer the oats in the water until they're tender but "toothsome," and all the water is absorbed, about 20 minutes. Add the brown sugar, butter, salt, and cinnamon, stirring until the butter melts. Transfer the mixture to a large bowl, and add the oats, whole wheat flour, and dry milk, stirring to combine. By this time, the mixture should have cooled considerably. Allow it to rest at room temperature, covered, for 1 hour. This will allow time for the oats to absorb the liquid and soften.

Stir in the yeast, then the bread flour. Knead the mixture—by hand, electric mixer, or bread machine—until the dough feels springy. It will remain fairly sticky, but it will definitely develop some body. Place the dough in a lightly greased bowl, and allow it to rise, covered, for 1 hour.

Gently deflate the dough; you may notice that it shreds easily. This is from the oats, but don't worry; it's OK. Shape the dough into an 8" log, and place it in a lightly greased 8 1/2" x 4 1/2" loaf pan. It will fill the pan fuller than you may be used to; that's OK, this bread doesn't have a lot of oven-spring. Cover the pan loosely with lightly greased plastic wrap, and allow it to rise for 60 minutes, till it's crowned about 1" over the rim of the pan.

Bake the bread in a preheated 350°F oven for 35 to 40 minutes, until an instant-read thermometer inserted into the center registers 190°F. Remove the bread from the oven, wait 5 minutes, then turn it out of the pan onto a rack to cool. Brush the top with melted butter, if desired; or simply run a stick of butter over the top of the hot loaf. Cool completely before slicing. Yield: 1 loaf.

I haven't made it, but I've had it at your house. The two breads are pretty different. This one isn't as dense or oaty as the toasting bread.

This looks fantastic! I'm adding it to my "must make" list for next week. Thanks!

No, thank you fuji mama. :D

Let me know how it turns out.

Oats, when added to dough at the outset, will dissolve into the bread and as you noticed, not give you any oat flakes IN the bread when you're eating it. To get around that, when I punch down bread after the first rise, I sprinkle more oats onto it and gently knead them in before the second rise. Those flakes are then present in the finished loaf.