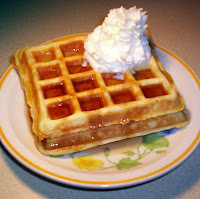 Heat up your waffle iron. Combine wet ingredients and whisk well to combine. Sift dry ingredients into a large bowl. Add the wet mixture to the dry and fold it in. Don't sweat it if there are some lumps. When iron is hot, spray with non-stick spray or rub with butter. Depending on the size of your iron scoop 1/2 to 3/4 cup of batter onto the iron and cook until a golden brown crust forms. Serve hot with syrup or jam.

So I'm not done with the site renovations, but I wanted to put this up anyway. I have a feeling I won't be done fiddling with stuff here for a while. Anyway, I had a cup or so of sour cream left over from stroganoff and wanted to do something with it. I have a couple recipes for various sour cream baked goods, but I was craving waffles wicked bad. A quick search of the nets turned up a whole bunch of recipes. I decided to adapt one from Alton Brown since it used up all my sour cream and no eggs needed separating. I love waffles, but I'm not separating eggs for them. That just seems like a bit much. So, these. They were good, I will definitely be making them again. I bet they would have been even better if I had remembered to put in the baking soda. But for demonstration purposes, we'll just pretend I did.

First turn on the waffle iron, you want to be sure it's totally preheated.

Whisk it till well combined.

Mix together the dry ingredients

and fold them into the wet mix.

Don't worry if there are a couple lumps, they will cook out. You really don't want to over mix them, they will get tough and that's no good. Grease your waffle iron, either with butter or some kind of non-stick spray. I usually just use the spray, it's easier for the angles and such you have to deal with on the iron. Now scoop the batter onto it, how much you need to use depends on the size of the iron.

I had to use about three quarters of a cup of batter on mine. Now just cook till golden brown, should take about 6-8 minutes or so. I think... I wasn't paying very much attention I'm afraid.

There you go, waffles. I can never get two hole-free waffles. Ah well, it doesn't change the flavor. Serve them with something good, like maple syrup, fruit preserves or whipped cream.
Email ThisBlogThis!Share to TwitterShare to FacebookShare to Pinterest
Posted by Bob Labels: breakfast, dessert at 10/02/2008 07:20:00 PM

...no waffle iron? You poor thing. But you're married, you should have like five. :)

Cool changes around here! Looks great and so do those waffles. Love waffles on the weekend!

Thanks Jenny! Yeah, waffles are a good time. I only wish I had had some chocolate chips to toss in there. Heh.