2 lbs eye round roast (or other pot roast roast) 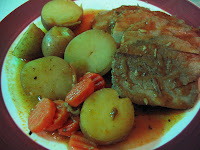 Preheat oven to 300 degrees. Brown the onions and garlic in a medium, oven safe pan, big enough to fit the roast in and with a good lid. Remove them from the pan and rub the roast with marjoram, salt and pepper. Brown it in the pot in a little oil. Deglaze the pot with the water, broth or wine. Put the meat, onion, garlic, tomato sauce, bay leaf and basil in. Cover the pot loosely with foil then press the lid on tightly. Cook for 2-3 hours, till fork tender. During the last hour or so toss in the potatoes and carrots.

So, can you tell it's fall yet? Where I am, just northwest of Boston, the leaves are changing colors and the temps are down in the 50-60s during the day and 30s at night. Which means it's time for pot roast. I wasn't crazy about pot roast when I was a kid, I would eat it but I didn't get into it. Not that my mom doesn't make a good pot roast, she does. I just didn't feel it. Now, I love it. My girlfriend loves it too, she's a real meat and potatoes girl and this is pretty much the epitome of that. I had an eye round roast in the freezer and was wondering what to do with it. I asked around the forums on Bakespace and the consensus was pot roast. Unfortunately my crock pot is only 1.5 quarts, more for show than use, so I did it in the oven. I also figured if I did it in the oven I could just mess up one pot. How did I do it, you ask? Like this.

Just a little side note, I have a new (sorta, it's a hand-me-down) camera and am still getting used to it. If any of my pics are wonky, let's just blame it on that, ok? Thanks.

First, brown up the onions and garlic. 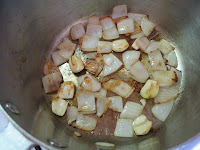 I left the garlic mostly whole, figured it would break down in the long cook. I cut them in half to take out some shoots though. The onions are rough chopped, again because they will break down. Now rub the meat with salt and pepper. I also used a bit of marjoram because I thought it would be good. I pulled the onions and garlic out of the pan and browned the roast. 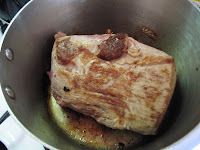 Once it had some nice color I pulled it out and deglazed the pan. I wanted red wine or beer, but not enough to leave the house (I have a cold, so it's not pure laziness). My second choice was beef broth, but I don't have any base left. So I just used water. I figured there would be plenty of flavor with all the other stuff going on. Now, everything goes back in along with the bay leaf, tomato sauce and basil. 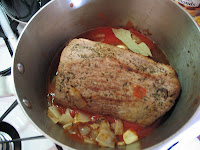 I know it doesn't look very browned, but it was. It's the camera, I swear. Now if you're using a pot with a good, tight fitting lid then you are good to go. My pot is less than ideal so I put a piece of aluminum foil over the pot then put the lid on that and it helps it fit tightly. 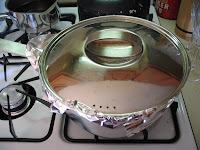 Then I tossed it into a 300 degree oven for about 3 hours. After maybe 2 or so I put in a bunch of baby red potatoes that I had scrubbed and cut in half and some carrots. 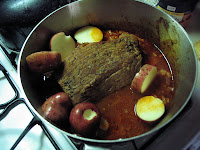 The carrots were frozen. It's what I had. But it came out great, so that's good. Not too shabby for my second pot roast ever. I spooned the liquid over the meat just how it was, but if I had hit it with and immersion blender it would have been even better. If you wanted it thicker you could leave a couple potatoes in when you blend it.
Email ThisBlogThis!Share to TwitterShare to FacebookShare to Pinterest
Posted by Bob Labels: beef, comfort food, main dish, recommended side at 10/28/2008 10:03:00 PM

Hi! Great blog. It is my first visit because I just saw you responded to my inquiry about tofu finger on Zesty Cook and you used the wicked, so I knew you were close by me!

Mmm, pot roast. You know, I couldn't tell you the last time I had it.
I didn't like it as a kid, either.

YUM!!!!
And you're being such a tease describing my favorite weather from my hometown area!!!!

Thanks Hangrypants! Where abouts are you, if you don't mind me asking? Did you wind up making the tofu fingers?

Isn't that wierd Emiline? I've recently found that I have started liking a lot of things I didn't like as a kid.

Hi, there! I followed you over from Zesty's blog. It's just starting to snow here, so this is the perfect cold-weather dinner!

Hi Juliet, thanks for stopping by! All kinds of folks coming here from Zesty today. :) Snow already? Lucky, I love snow.

Ahhh, is there anything better than a good pot roast!? Yours looks great, we have this often for Sunday dinners at the in-laws.