Mix together the crumbs and butter and press them into the bottom of a 9-inch springform pan. Warm up the milk in a small sauce pan and add the chocolate. Stir it gently till the chocolate is melted. Pour the mixture over the crumbs and put it in the freezer till it's set, at least 10 minutes. Mix together the sugar, cream cheese, and flour. Add the eggs, one at a time, mixing well after each addition. Then add the sour cream and vanilla. Stir it well. Pour it into the prepared pan and bake at 350F for 55 minutes. Loosen cake from rim of pan with a knife and let it cool before removing the rim of the pan. Refrigerate it for at least 6 hours, pull it out of the fridge a half hour before serving.

Irrigation. Written language. Submarines. Space flight. Impressive? Absolutely. But none of them are as delicious as cheesecake. Cheesecake is truly one of humankinds greatest creations. Smooth, sweet, tangy, rich and covered with some kind of fruit sauce more often than not, cheesecake stands alone among desserts. If sweets were a crime family, cheesecake would be the Don. Sitting in a dimly light room, smoking a big cigar while his second in command, tiramisu, stands behind his shoulder, glaring balefully at the lesser desserts that have come to petition for favors. Uhm.. yeah. Anyway. I like cheesecake and wanted to make one. So I did. I put some chocolate on the bottom because it sounded good. And it was. I love it when everything works out. So, here it goes.

First take about 10 cookies or so and put them in a zipper bag.

Smoosh them up really well with a rolling pin.

Mix them with the melted butter

and press it onto the bottom of the pan.

Unfortunately I don't have a springform pan. But I can't let that stop me from making cheesecake, so I just use a cake pan. It's not as easy to get the pieces out, but it works ok. As you can see I needed a little more crumbs, so I just crushed up a couple more cookies and sprinkled them on top.

and then toss in some chopped milk chocolate. 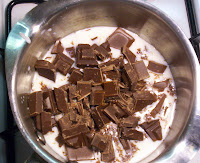 You don't have to use milk, you can use whatever kind of chocolate you like. Just make sure it's good for straight eating. Take it off the heat, stir it around till it's melted and then pour it into the pan on top of the crumbs.

Now put it in the freezer to set, it will keep the chocolate from moving around when the batter is poured on it.

Now get a big mixing bowl and put the cream cheese, sugar and flour in it.

Mix them up good.

Using a hand or a stand mixer is good, I just did it by hand. Once they are well mixed add the eggs, one at a time, mixing well between each one.

Once the eggs are in add the sour cream and vanilla and mix it up well again.

Now pour it into the prepared pan.

I found I had a little leftover, probably because my cake pan is a little smaller than a springform one. So I put some cookie bits in the bottoms of a couple ramekins

and poured the rest of the batter into them.

Now just bake at 350 for 55 minutes and that's that. I meant to take the little ones out before that, but flaked on it.

They were a bit overdone. 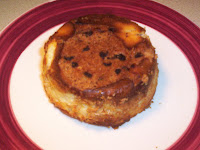 But still quite good.

The big one came out perfect, except for a few cracks.

I don't really care too much about cracks on my cheesecake. You should let it cool to room temp then tightly wrap it in plastic wrap and put it in the fridge. Let it chill for at least 6 hours. I know, it hurts. But it's for the best.
Email ThisBlogThis!Share to TwitterShare to FacebookShare to Pinterest
Posted by Bob Labels: baked goods, cake, cheese, chocolate, dessert at 10/11/2008 04:47:00 PM

Wow, look at all these step by step photos. What a great post. Your cheesecake looks terrific!

You tempt me with your cheesecake! It looks so good.

Thanks ladies. :) I enjoy tempting with cheesecake. Heh.

I"m not a chocolate fan... but I love the candy layer between the crust and the cheesecake!

Hmm, no chocolate huh? It would be good with caramel or toffee, I bet. Although toffee would be a bit hard to eat. One of the nice things about the chocolate was it turned out rigid, but still soft enough to cut with a fork.

My girlfriend requested one with raspberry jam on the bottom, which I think will work out great. That's what I'm doing next.

Maybe even mix the white chocolate into the cheesecake part. Perhaps some toasted pecans in the crust... oh yeah, that's doable. Next time. :)

Great recipe bob. I love this cheesecake for two reason, there is not topping and I love the plain look of the cheesecake and I love the chocolate bottom. I dont like recipes that drizzle chocolate sauce all over the top. Anyone interested can check out my recipe at http://www.cheesecake-recipes.org and submit your own as well.

Bob, you sure know the way to girl's heart-chocolate and cheesecake!

Thanks Allie and Elle!


Frost free models are better at maintaining consistent temperatures, and keeping food items fresh for a longer period of time.