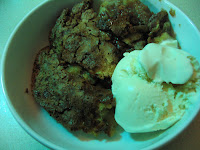 Lightly spoon flour into a dry measuring cup; level with a knife. Combine flour, baking powder, and salt in a medium bowl, stirring with a whisk.

Place sugar, vanilla, and eggs in a large bowl; beat with a mixer at medium speed for 3 minutes or until thick. With mixer on low speed, gradually add flour mixture. Gently fold in apple mixture and pecans. Spoon batter into an 8-inch square baking pan coated with cooking spray. Bake at 350º for 25 minutes or until top is puffed and deep golden brown. Serve warm, with vanilla ice cream or whipped cream.

Ok, first off I need to apologize for the pictures in this post. I wound up with a slip of the knife and a big slice taken out of one of my picture taking fingers, so they are a bit worse than normal. But it was worth it! This is a fantastic dessert, well worth a little blood, especially since none got in the pudding (would that make it... blood pudding? Ha! I heard you groan. It's ok, I understand, it was a really, really bad "joke".). Now, where did this dish come from? My sister in law makes it, but I don't recall exactly where she got it from. It is an awesome fall dessert, wicked easy, warm, delicious, rich and yet light in fat. Lets just get right to it, shall we?

First things first, peel and chop the apples and toss them with the brandy. 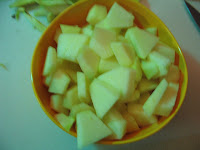 And maybe eat a few. I know I did. And toast and chop the pecans. I don't have any pics of that because, well, I forgot to toast them. It happens. But now I know that the toasting does make a difference, although it was still wicked good. Next you want to mix together the dry ingredients; the flour, baking powder and salt. Set that aside. 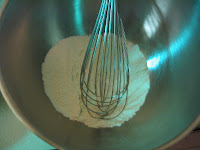 Now mix together the eggs, vanilla and sugar. 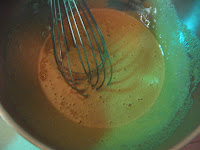 The recipe calls for an electric, but I just used a whisk. I'm a madman. Add the dry mixture, I did it half at a time, 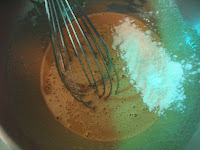 mixing gently but thoroughly after each addition. 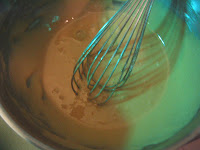 Now fold in the nuts and apples. 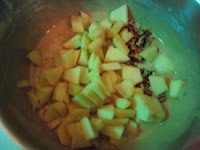 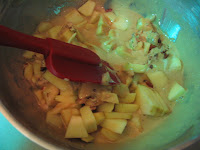 Grab an 8x8 pan, spray it with cooking spray (or rub it with butter) and pour the batter on in. 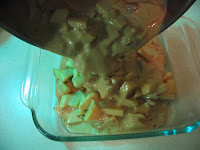 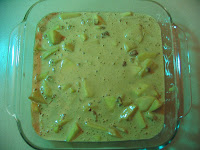 Bake it at 350 till golden and irresistible looking. 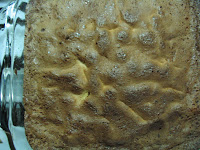 Now spoon it up with some ice cream and enjoy.
Email ThisBlogThis!Share to TwitterShare to FacebookShare to Pinterest
Posted by Bob Labels: dessert, fruit at 11/06/2008 11:18:00 AM

So do you dance the Charleston while you're eating this?

Heh, well I guess you could... but not me. No one wants to see me try to dance. It's not pretty. There is laughter (not with, at), finger pointing, concerned looks, that kind of stuff.

this looks so yummy- thanks. Going to be attemping it soon!

Thanks, Ask the Booth! Let me know how it turns out.

This one actually came from Cooking Light. I don't think we ever made a recipe from them which was not good. We stopped subscribing, and now we just buy the cookbook at the end of the year with all the recipes in it :)

Can you substitute chicken broth for the brandy?

"Can you substitute chicken broth for the brandy?"

...ew. No. But you can just leave it out if you don't want to run the risk of touching alcohol. :) Of course, if you are that worried about it you shouldn't use vanilla either, since the liquid in that is booze. :P

This is a great recipe. Thanks so much Bob. The pudding was delicious!

Sarah: Glad you liked it!