This months burger for the Blogger Burger Club gets four stars kids! 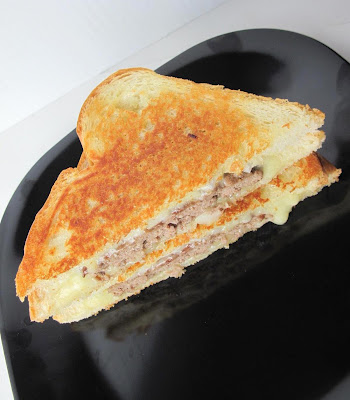 Seriously. Course, I'm biased since I've been making something a lot like this since I was a teenager, but hey. A good burgers a good burger, know what I'm saying?

I guess there was a bit of controversy when the original recipe won a contest, with people saying this isn't an actual hamburger (it won a contest, so there has to be controversy, right?), but I'm not sure where the detractors get off. I mean if you really want to you can argue almost anything, but it's a ground beef patty in between two pieces of bread. That's a burger. I figure if you can call an open faced burger a burger then this is totally a burger. Shall I say it once more? Ok, burger.

Anyway, it's exactly what the name implies and it's awesome. 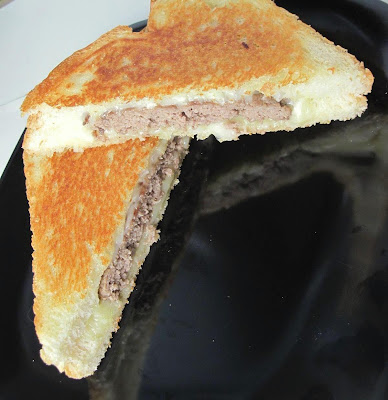 I might just go make one for lunch today. Do you like burgers? Then head on over to Cinnamon Spice and Everything Nice and get in on the Burger Club. It's a good time.
Email ThisBlogThis!Share to TwitterShare to FacebookShare to Pinterest
Posted by Bob Labels: Blogger Burger Club, cheese, hamburger, sandwich at 5/10/2010 11:45:00 AM

I agree. if it's meat, in patty form - definitely a burger. But controversy is the spice of life. Right?

This burger is so good! I make this often in our house.

I think my favorite "burger" is a patty melt. as a matter of fact, I KNOW it is. and it's always listed in the burger section on the menus.

I'm with you a burger.. Toasted buns the bomb in more ways than one..

Need to make this for sure!

It looks worthy of its 4 stars rating

I would eat this burger too!

of course it's a burger! and a darn fine one at that. silly haters.

I do indeed like burgers. But, I don't make them at home. For some reason, the idea doesn't excite me. I do, however, enjoy ordering burgers at restaurants, and reading about burgers other people have cooked at home.

I agree. A meat patty and two pieces of some kind of bread is a burger.
But I can just see the purists lined up to argue!

it definitely reminds me of a patty melt.

Delicious juicy burger why aren't you on my plate right now.

dude i am so with you on this one. i make these w/ that pimento cheese. try it, ok? you'll love it.

Ground meat cooked into a patty is a hamburger in my book! Looks delish

Yum, I could so go for this right now!

Thanks for making the burger! I'll be making it one form or another for the rest of my life! It's totally delicious.